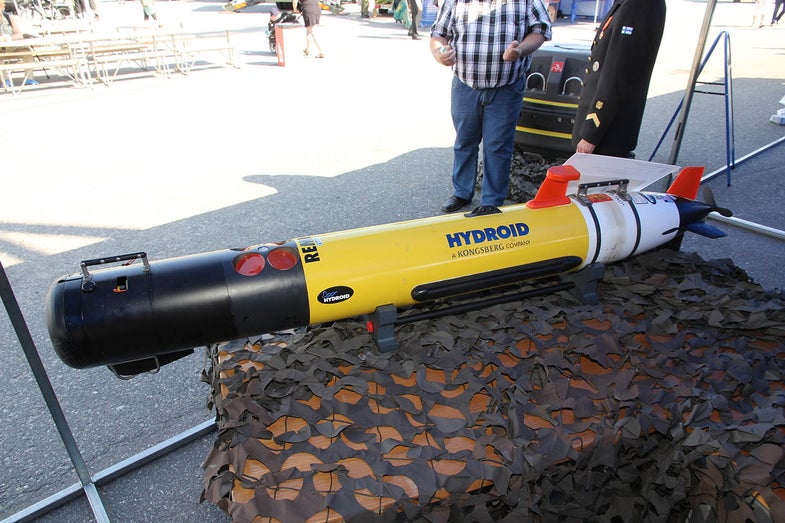 Sailors have for millennia known that the sea hides far more than it reveals. Nowadays, finding robots under the water is almost an inevitability, though that didn’t mean Maryland crabber David Haas was expecting to find one. On November 5th, near the Chesapeake Bay Bridge, Hass was crabbing with his crew when they caught an underwater military drone.

Here’s how the local Kent County News reported the encounter:

The object, it turns out, was an autonomous underwater vehicle, or a sea drone, owned by defense giant Northrop Grumman. After the Hass family called the number on the side of the drone, the company picked up their watery robot the very next day. Motherboard identified the specific machine as a Remus 100, built by Norway’s defense giant Konsberg. The Remus series of underwater robots are scouts and patrol units, exploring below the sea, looking for explosive mines and other threats.

Unlike airborne drones, which are often remote-controlled, sea drones are more autonomous machines, since the signals needed to control them don’t travel so well through the water.

We don’t know for sure what the robot was doing, but there’s about 23 miles of water between the Chesapeake Bay Bridge and the Naval Research Lab’s Chesapeake Bay Detachment. The Remus 100 can move for 22 hours at 1.5 mph, so that’s at about the outer limits of how far it can go on its own.

That autonomy is great most of the time, but it also means the robots can get lost. When they do, it’s nice for them to find a friendly fisherman who can bring them home. Failing that, a crabby fisherman will do too.