Congress Wants NASA To Create A Deep Space Habitat By 2018

The next big step towards sending humans to Mars 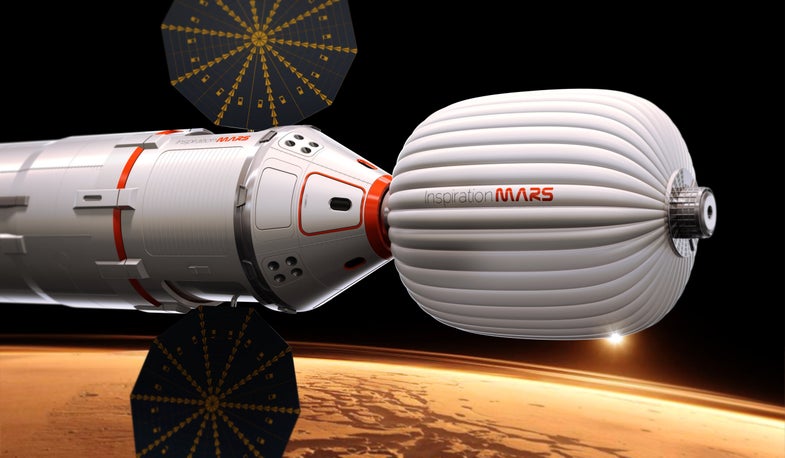 NASA may dream of sending humans to Mars in the coming decades, but the fact remains that nobody’s really sure how we’ll survive the journey or set up camp on the red planet.

The Orion spacecraft that will drive astronauts to Mars has a diameter that’s about the length of a pickup truck. That’s not a lot of space when you consider the astronauts’ journey to Mars will take at least 6 months.

In order to not go totally bonkers, Mars-bound astronauts will need a larger place to live, complete with private quarters and exercise equipment. NASA envisions the Orion capsule could link up to a habitation module in space, but right now they have no idea what that module could look like. And who knows what the astronauts will live in once they get to Mars.

Now SpaceNews says that a report attached to the recent omnibus spending bill has allocated funds for NASA to figure it out. The bill orders NASA to spend at least $55 million to develop a habitation module for deep space exploration, and to have a prototype ready by 2018.

That would be great timing, since NASA wants to test out its new space habitat around the moon in the 2020s before sending it to Mars in the 2030s.

The not so creatively named Deep Space Habitat is one of many concepts that NASA is looking into.

However, whether NASA could have something ready by 2018 seems debatable. At this point, the agency pretty much has a blank slate as to what the habitat would look like and how it would function. Shielding astronauts from space radiation while also maintaining a light weight will be one of the major challenges.

Thus far Bigelow Aerospace’s inflatable habitat stands out as a frontrunner–a test version of the habitat will soon be deployed on the International Space Station. SpaceNews reports that NASA has also awarded funds to Boeing, Lockheed, Martin, Orbital ATK, and other companies to look into potential habitat designs.

It looks like NASA will have to step up its game, and fast. The report requires NASA to come back with a status update about how it has distributed funds within 180 days of the bill becoming law, which happened on December 18.