Five new ways to get your point across 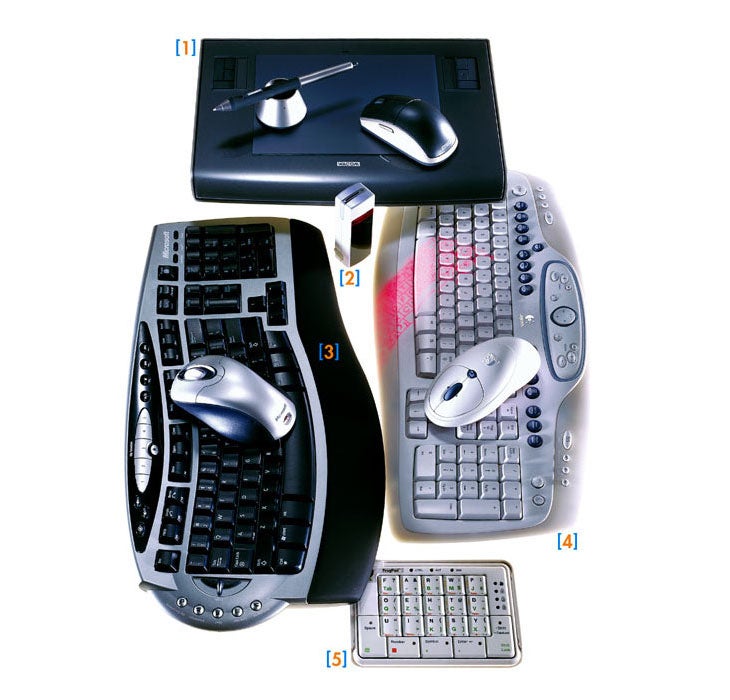 More than half a million people every year suffer from repetitive stress injuries. “The risk of injury is four times as great for people who spend six hours a day at the computer as it is for those who spend less than one hour a day,” says Alan Hedge, a professor of ergonomics at Cornell University.
One hour a day? Nice work if you can get it. The rest of us are stuck searching for ergonomic options–whatever that means. “Think of ‘ergonomic’ the same way you think of ‘low fat,'” Hedge warns. “There’s no absolute, and there are no standards.” Still, some text-input devices are reasonably comfortable. Others are convenient. Here’s a variety that’ll do the job while you’re waiting to hit the lotto.

1. Wacom Intuos3
The cordless, pressure-sensitive pen for Wacom’s upgraded drawing tablet has numerous nibs to mimic the feel of a brush or pencil. Pens aren’t more ergonomic than mice, Hedge observes, but at least they don’t lock you into one position. $330; wacom.com

2. VKB Virtual Keyboard
Designed for PDAs, the VKB uses infrared and laser light to project a Qwerty layout and detect flickering fingers as they break the beam. The problem, Hedge says, is that tapping on a hard surface may cause injuries too. $150; www.vkb-tech.com

3. Microsoft Wireless Optical Desktop
The keys are arranged along an arc–like a split keyboard without the split–to encourage a natural typing angle. Such an arrangement helps to keep your hands aligned with your forearms, Hedge notes. $75; microsoft.com

5. FrogPad
What is it? A one-handed Bluetooth keypad for PDA and cellphone input. It displays the 15 most-used letters; a shift key gets you to the other letters and symbols. But two hands are better than one, according to Hedge. $175; frogpad.com