Coming Soon: 7 Continents Worth Of Household Bugs And Microbes

An ongoing project aims to uncover the unseen critters living in our homes. 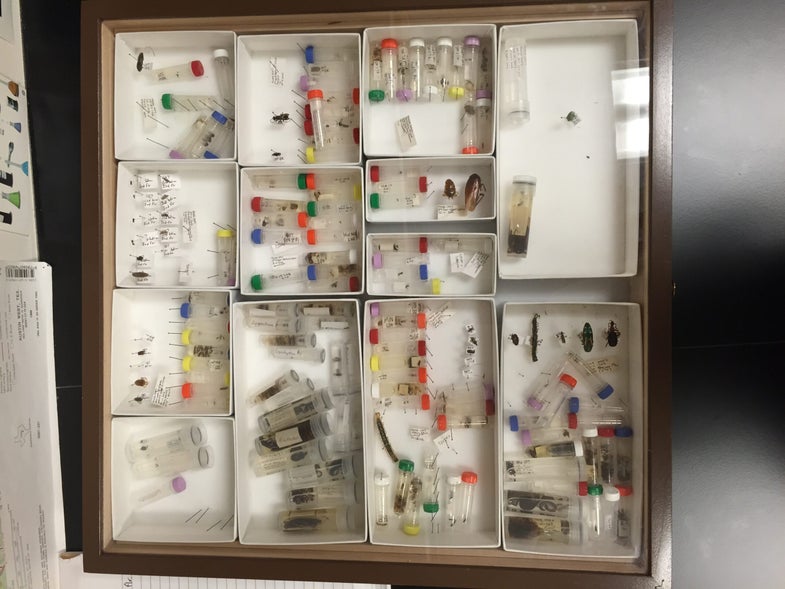 I was traveling over the past few weeks, including a stop in San Francisco where I had the pleasure of doing a book talk for an engaged—and perhaps tipsy—audience at the California Academy of Science’s NightLife party. Before the event, I was even luckier to get a couple of behind-the-scenes tours. One was with Michelle Trautwein, an assistant curator in entomology at the Academy.

Our first stop was Trautwein’s office, where the collection of insects in the above photo caught my eye. It turned out that these were all found in a single home in Raleigh, North Carolina, when Trautwein—then at the North Carolina Museum of Natural Sciences—and colleagues at North Carolina State University were working on a project called Arthropods of Our Homes. The team found more than 500 arthropods representing 200 unique species in the house, including centipedes, big smoky brown cockroaches, and a metallic wood boring beetle. A single home! All those critters!

The work was part of a collaborative project to explore the unseen insects, microbes, and other near-invisible creatures that share our homes. So far, scientists don’t know very much about these ecosystems despite the fact that we spend much of our time in them. “We live with a lot of arthropod diversity in our homes and on our bodies,” says Trautwein. “Much of it is unseen, but is part of our own ancient evolutionary story.”

Next, the team plans to extend the project to all seven continents. The goal, Trautwein says, is “to explore the diversity and evolution of arthropods in the every day lives of humans around the world.”

In addition to insects, the researchers will collect face mite from the homes’ occupants and swab kitchen counters, doorknobs, windowsills, and rugs to figure out what bacteria live there. (For more on relevant mite and bacteria research, check out this story by Ed Yong at NatGeo and this one by me here at Our Modern Plagues, respectively.)

Trautwein and her colleagues at the California Academy of Sciences have already pulled specimens from six homes in San Francisco. Here’s a video from one of the collections:

Later this summer, the team will head to the Peruvian Amazon and Sweden, and they’re planning a trip to Madagascar in November. As for the remaining continents, those are still in the works. In all the cities, they plan to collect from six to ten homes.

“The global study is very exploratory. I’m interested in finding arthropods that have a global distribution,” says Trautwein. “I also want to understand more about how the physical features of houses and urbanization effects the arthropod communities that we live with, as well as exploring the cultural reactions to arthropods in houses.”

Your Wild Life: Arthropods of Your Home