Now climate change is coming for our sea turtles

Frigid winter waters and scorching beaches could put them in peril, but people are fighting back. 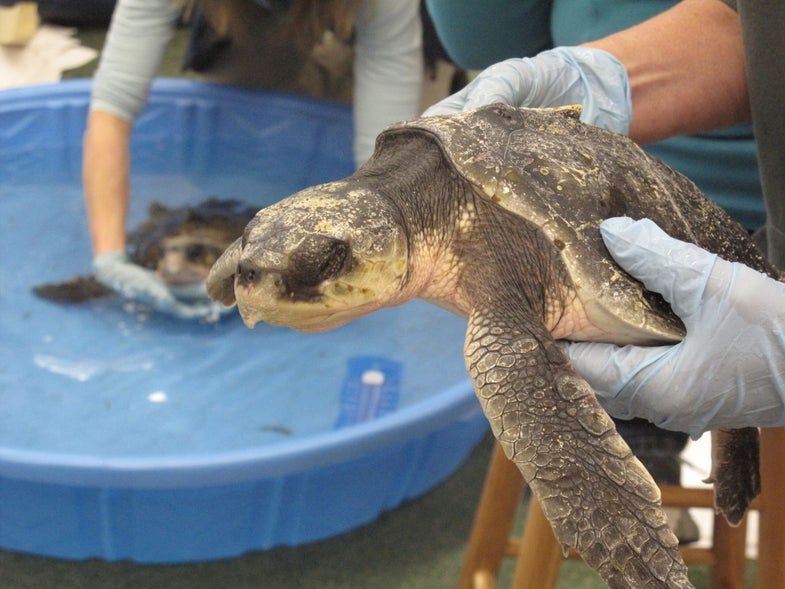 Every year, young sea turtles migrate up the East Coast to spend the summer foraging in northerly waters. Sometimes, they wind up in the Gulf of Maine, which stretches from Cape Cod Bay to Nova Scotia. As the weather cools, the turtles, including endangered Kemp’s ridley and loggerhead turtles, begin to swim south.

A few of these turtles will run into trouble. Turtles follow the coastline as they travel, and on their way back from Maine, they eventually find their way blocked by Cape Cod, which juts out into the sea in the shape of a hook. If a turtle has commenced migrating early enough in the season, it can summon the energy to navigate around this peninsula. But come fall, the cold-blooded turtles become sluggish and unable to reach their maximum swimming speed. They become trapped in Cape Cod Bay, and may seek refuge near the seafloor, where the water is a little warmer.

“If it warms up again, they swim around some more, but then another cold front comes through and they go back down, and they’re never going to get out,” says Bob Prescott, director of Mass Audubon’s Wellfleet Bay Wildlife Sanctuary on Cape Cod, who has been rescuing stranded sea turtles since the 1970’s.

Eventually, the turtles become cold-stunned, or hypothermic. Disoriented and unable to swim, the turtles are carried ashore by the wind and waves.

In recent years, there’s been a sharp rise in the number of sea turtles found in this condition along the beaches of Cape Cod. This shift may be related to climate change, as warmer waters in the North Atlantic lure sea turtles farther north.

And an increase in strandings is unlikely to be the only consequence. Researchers worry that climate change is a danger to turtles on land as well as sea—as beaches heat up, more eggs and hatchlings are likely to perish.

Fortunately, there’s a lot we can do to help turtles in these situations. Stranded turtles and imperiled nests both are found close to human habitation. Here’s how researchers are preparing for a future where more sea turtles may find themselves in jeopardy.

The rise in turtle strandings may be related to the fact that the Gulf of Maine is warming faster than almost any other ocean waters on Earth. Already, cod and northern shrimp are leaving for cooler waters.

Sea turtles may be affected too, lulled into a false sense of security by warm summer waters to feed and linger in northern areas. “I think there’s a direct relationship, but…it’s still in the stage of anecdotal information,” Prescott says. Between rapidly heating waters and the barrier posed by Cape Cod, the bay could be a particularly dangerous place for sea turtles.

Prescott is also examining how early nor’easters can impact sea turtles. The winds from these storms may be blowing turtles from drifting seaweed patches in the Gulf Stream into the Gulf of Maine, he says. At the moment, however, it’s too soon to tell how much warming seas or storms are contributing to the uptick in turtle strandings.

As turtles continue to push north, they are likely to wander farther into Canadian waters. “The Gulf of Saint Lawrence could be the next area that might open up and could be a threat to sea turtles in the early fall,” Prescott says. That far north, the turtles would face a rocky, sparsely populated coastline. “There’s lots of places where a turtle could wash up and no one would find it.”

On the shores of Cape Cod, cold-stunned turtles are much more likely to be noticed. After a medical checkup, the turtles Prescott and his gang find are released south of Long Island.

He’s not just scouring the beaches for turtles in distress, however. He would like to know where the animals are being washed in from. Partnering with National Oceanic and Atmospheric Administration (NOAA) researchers, he is sending out buoys with a GPS system. Based on where the buoys drift, they want to predict the paths that weakened turtles drift along before they reach the beach.

“In late September and early October they’re already compromised,” Prescott says. “We might be able to send divers down to get them before they have to wash through the surf and strand.” If we can reach turtles before they have spent weeks enduring the cold, they will have a better chance of surviving.

One piece of good news is that Prescott and his fellow rescuers almost never have repeat customers. As the turtles mature, they leave the Gulf Stream to spend a few years near the coast, venturing only as far north as the mid-Atlantic in summer and wintering off Florida. So it’s rare for a young turtle to blunder into Cape Cod Bay more than once.

“Once they’ve learned their lesson and they’ve been released south of the cape, they never come back, with a few exceptions,” Prescott says. “It’s not a situation where we’re rescuing cold-stunned sea turtles, putting them back out and getting them again next year.”

Trouble on the beach

Long before a turtle can swim into open water, it must hatch, scramble up onto the sand, and waddle into the surf.

But the beaches that host this trek, incubate eggs, and draw adult turtles to return year after year to breed will likely heat up in coming years. This could create new dangers to sea turtles.

Climate change could skew the ratio of males to females in the turtle population. That’s because a turtle’s sex is determined by the temperature it incubated at as an egg. The warmer a nest is, the more hatchlings will be end up female. So toastier conditions could mean that fewer males are born.

In fact, turtle populations are already female-heavy. The males compensate by returning to breeding sites more often than females. So a few more ladies in the mix might not be too much of a problem, says Vincent Saba, a research fishery biologist at NOAA’s Northeast Fisheries Science Center.

He’s more concerned that fewer hatchlings will be born at all. When a nest becomes too warm, the eggs wind up “essentially cooking,” Saba says. Scientists have seen that nest temperatures around 95 degrees Fahrenheit or so are lethal for turtle embryos. And during a heat wave, the hatchlings that do make it to the surface can die upon scorching sands.

Leatherback sea turtles may be in a particularly vulnerable position. Under present-day conditions, only about 50 to 60 leatherback eggs will hatch for every hundred that are laid. Among other species, 90 percent of the eggs will hatch. “It could be that leatherbacks will be more susceptible to climate change because they already have a low hatching success,” Saba says.

Another concern is that as sea levels rise, nesting beaches may disappear. Even more worrying is that storms are expected to become more intense on average. A hurricane could wipe out nearly all the nests on a beach, or dramatically reshape it.

It’s not clear whether the turtles will have enough time to adjust or find new beaches as conditions change. “Sea turtles have been around for millions of years, they’ve gone through multiple swings in the Earth’s climate,” Saba says. “The key difference today is that the warming that we’re seeing is unprecedented.”

However, we can do something about overheated nests. Scientists are tracking how many turtles in a nest have hatched by digging through the shards of egg left behind. If they discover that too few hatchlings are surviving, it may be time to intervene.

Saba’s colleagues have been rigging up cloth shades and sprinkler systems over leatherback and olive ridley turtle nests in Costa Rica. They’ve found that simply blocking the sun and watering the sand around a nest can help keep the precious eggs cool.

For now, these dangers are speculative. It will be decades before we have enough information to determine definitively whether climate change is in fact causing more eggs to cook or leading increased numbers of adult turtles to strand on beaches.

In the meantime, sea turtles face plenty of other threats. Turtles may be poached for their meat, shells, or eggs, or become entangled in fishing nets. Coastal development has destroyed nesting beaches. Hatchlings are disoriented by beachfront lights when they emerge from their nests.

However, the United States and other nations have taken steps to safeguard sea turtles, such as protection under the Endangered Species Act, laws to keep lights off during nesting season, and turtle excluder devices on fishing nets.

“All of these things have paid off in a really big way,” Prescott says. Sea turtles are still in a precarious position, but populations around the United States and Central America are beginning to recover.

Saba and Prescott are optimistic that we can help turtles face future climate-related threats as well.

“We can definitely combat this,” Saba says. “We know that human intervention at turtle nesting beaches does work.” Plus, he says, the shades and sprinklers aren’t that expensive.

And we’ve honed our ability to rehabilitate stranded turtles over the years. In the past, rescuers might only save 20 to 30 percent of the cold-stunned turtles they plucked from the beaches of Cape Cod Bay, Prescott says. Today, more than 60 percent of these turtles survive and are released.

Saba expects that turtles will feel the impacts of a changing climate most keenly at their nesting beaches, as fewer eggs survive and hatch. “That’s actually a good thing for turtles,” he says. It’s much easier for humans to intervene on land than out at sea.

And there’s another silver lining. The rise in sea turtle strandings in New England waters may be related to the success of turtle conservation measures as well as warmer summers. “It’s a sad event when something washes ashore and strands, but it’s also an indication that the turtle populations are recovering,” Prescott says. “More are washing in, but they wouldn’t wash in if there weren’t more turtles in the system.”