A new picture of Rosetta's comet is an added bonus 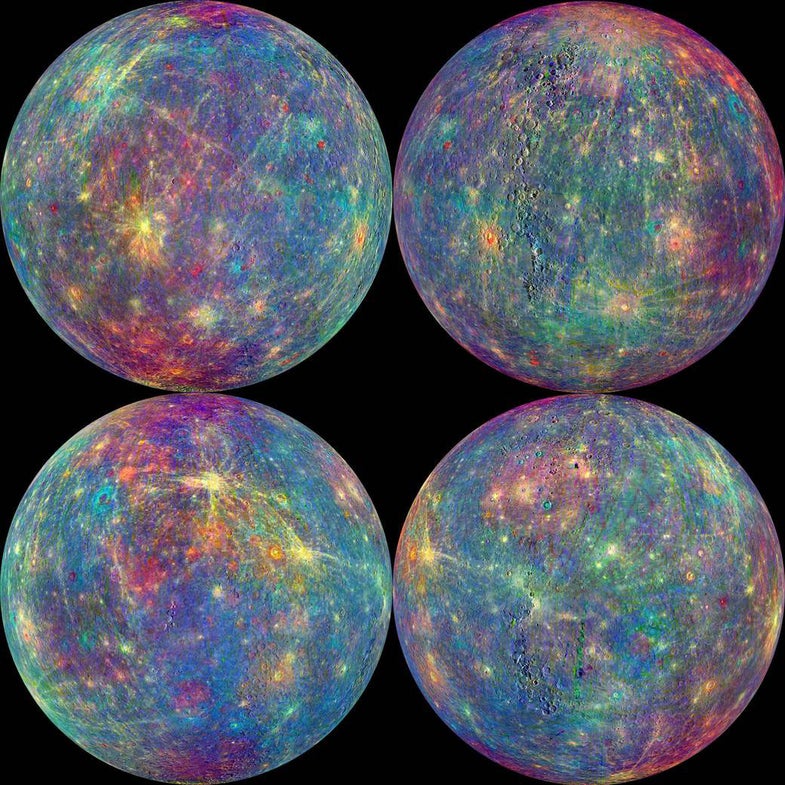 This beautiful rendering of Mercury is four years in the making: NASA's MESSENGER spacecraft has been collecting single tracks of spectral surface measurements since March 17, 2011, when MESSENGER entered Mercury's orbit. The spacecraft gathered the data to learn more about Mercury's minerals and surface materials, and the information was so detailed that distinct features like pyroclastic vents and fresh craters can be studied. NASA added color to accentuate the measurements before releasing the image this week. RIP MESSENGER, and thanks for this gorgeous data. NASA/Johns Hopkins University Applied Physics Laboratory/Carnegie Institution of Washington
SHARE 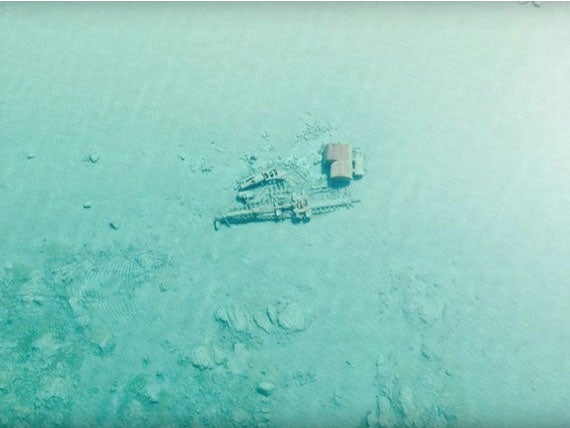 The Titanic of the Great Lakes

The remains of the Rising Sun, a 133-foot wooden steamer that sailed in 1917, was just one of the many shipwrecks spotted by the U.S. Coast Guard in Lake Michigan this past April. The water was incredibly clear during the seasonal transition, as winter ice melts and summer algae still has yet to grow. Lt. Cmdr. Charlie Wilson told NPR that while it’s not uncommon to spot sunken ships on routine patrols, the number they saw on the April 19 flight, or “Shipwreck Sunday,” was unusually high. 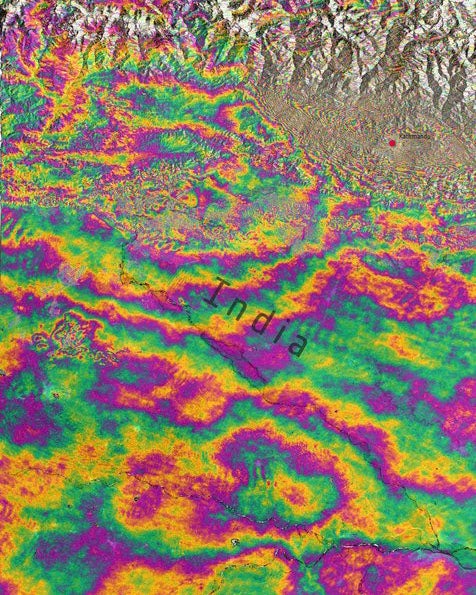 This week, the European Space Agency released this image of April 25 earthquake in Nepal. This interferogram, accurate down to a few centimeters, shows changes that occurred on the ground as the quake shook the South Asian country. The image combines data from two Sentinel-1A radar scans. According to the ESA, an overall area of 120×100 kilometers has moved. Nearly a week after the devastating earthquake, 1,000 people are still missing. 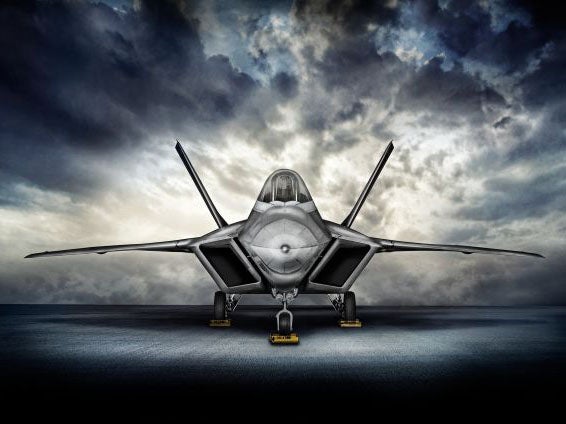 Photographer Blair Bunting took this awesome picture of the F-22 Raptor, the world’s most advanced fighter jet currently in operation. “So many expletives were said by us all in an attempt to describe what it looks like to see such an amazing piece of machinery sitting there prepped to be photographed,” Bunting said on his blog. “The plane was enormous, but looked like pure speed.” 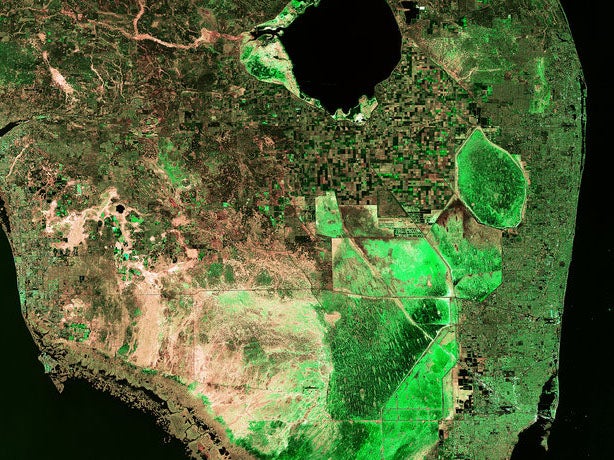 How’s The Weather Up There?

The Sentinel-1A satellite captured this aerial view of the Sunshine State in November. This image was taken using Interferometric Wide swath mode, which provides detail down to 5×20 meter patches on the ground. Add in a little artificial coloring using data from the polarization of radar pulses, and you have this beautiful map showing patters of Florida’s agriculture and infrastructure. 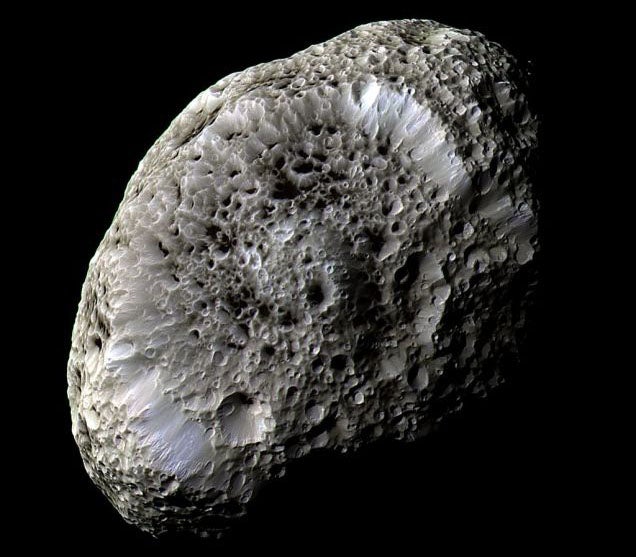 A New Look at An Old Picture

The Cassini spacecraft originally snapped this picture of Saturn’s moon Hyperion back in 2005, and the European Space Agency just released this refined, color-adjusted perspective of the potato-shaped, sponge-like moon. The moon’s natural redness is toned down in this version of the image so we can see the surface features more clearly. One of the largest irregularly shaped objects in the Milky Way, this giant potato is 255 miles across at its widest. Much like our own Moon, Hyperion is a charged object–in fact, it released a burst of charged particles toward Cassini during its flyby, effectively delivering a 200-volt electric shock. 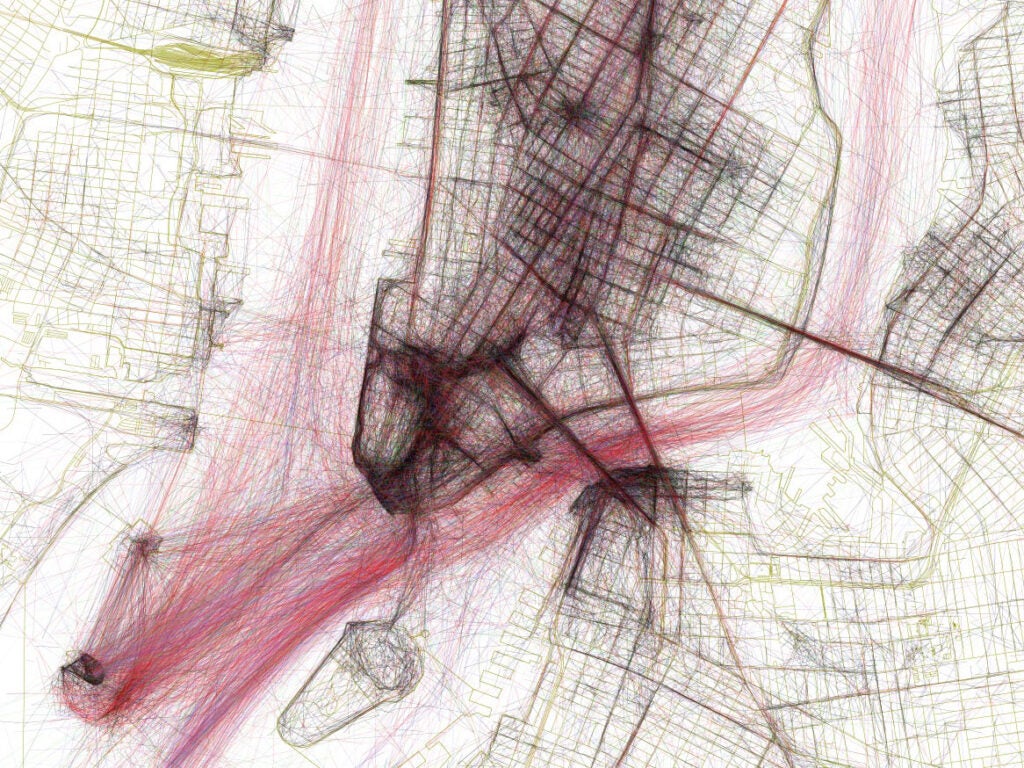 Data artist Eric Fischer uses Flickr’s API to create what he calls the Geotaggers’ World Atlas, which he hopes will reveal the world’s most interesting places. For five years now, Fischer has searched for and drawn lines between clusters of photographs taken in various cities. This map of Lower Manhattan shows the most popular areas for photography. “A cluster of geotagged photos is a good indicator of the interestingness of a place, because it signifies that people went there in the first place, saw something worth taking a picture of, and put the extra effort into posting it online for others to appreciate,” Fischer said. In 2014, Fisher created another data visualization for which he mapped out worldwide Twitter conversations. 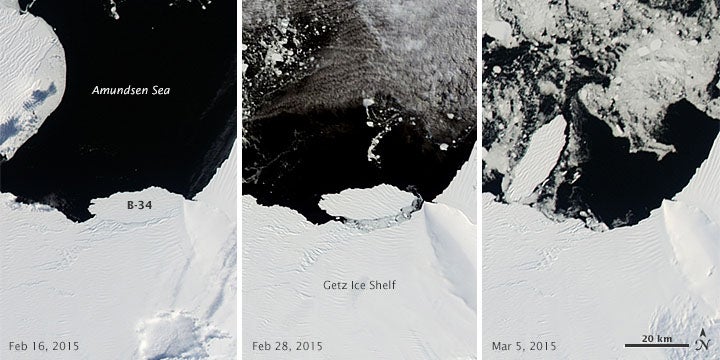 He Got it From His Mama

With all the bad news we’ve been hearing about global warming lately, it’s nice to see that some icebergs are still doing their thing. In early March, the U.S. National Ice Center found a new iceberg floating off the coast of Antarctica. It’s pretty big for a newborn, measuring 17 miles (or 27 kilometers) long–that’s eight kilometers longer than the minimum length for tracking by the NIC. These three images show the progression of the Baby Iceberg separating from Mama Iceberg, otherwise known as West Antarctica’s Getz Ice Shelf. 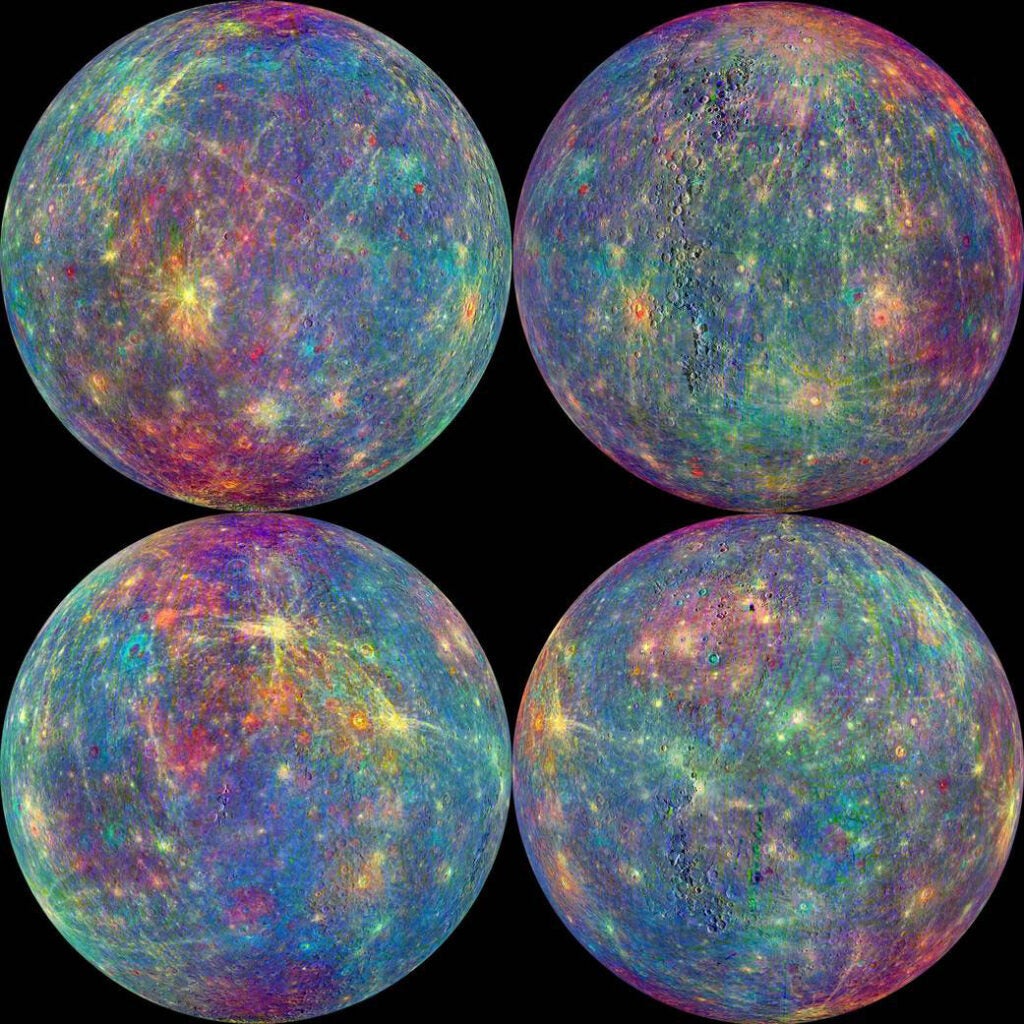 This beautiful rendering of Mercury is four years in the making: NASA’s MESSENGER spacecraft has been collecting single tracks of spectral surface measurements since March 17, 2011, when MESSENGER entered Mercury’s orbit. The spacecraft gathered the data to learn more about Mercury’s minerals and surface materials, and the information was so detailed that distinct features like pyroclastic vents and fresh craters can be studied. NASA added color to accentuate the measurements before releasing the image this week. RIP MESSENGER, and thanks for this gorgeous data. 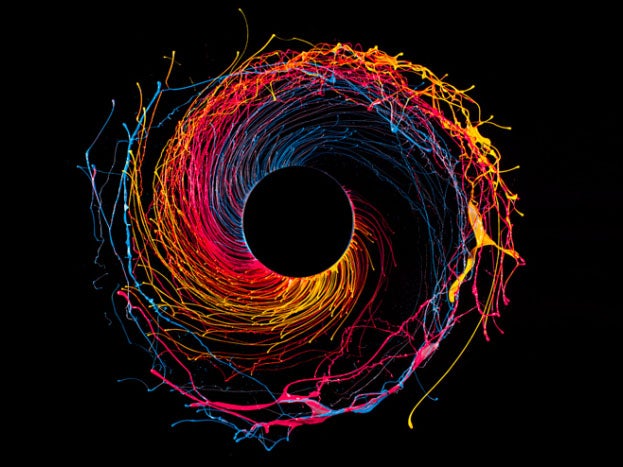 While space exploration may mean NASA and spaceships to most of us, Fabian Oefner explores space with his art. This work is a part of his “Black Hole” series, for which he coated a metallic rod with paint, connected it to a drill, and made it spin. The results are a swirl of color around a gaping black center. “To me, there was never a separation of art and science,” Oefner said. 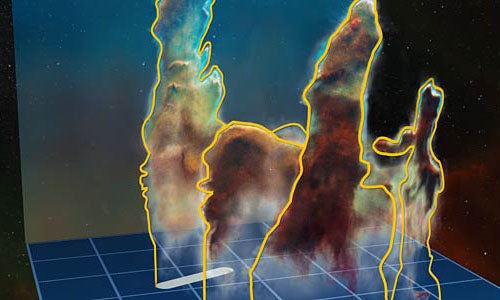 Astronomers have produced a three-dimensional image of the Pillars of Creation using an instrument on the European Southern Observatory’s obviously-named Very Large Telescope. The original image, taken by the Hubble Telescope two decades ago, shows what space looks like as stars are born. Now, we can see details like how these dusty pillars are distributed in space. The structures are set to evaporate in about three million years, which the ESO says is “an eyeblink in cosmic time.” 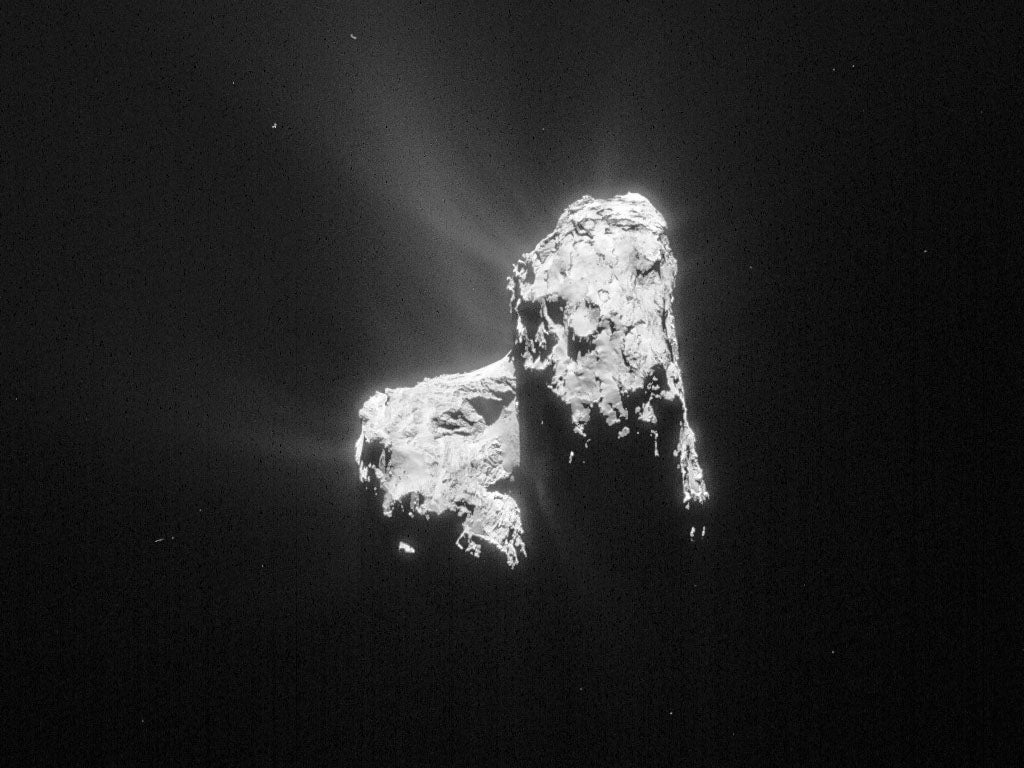 Catch Me From My Good Side

This Rosetta image of Comet 67P/Churyumov-Gerasimenko was taken from 128 kilometers away. The European Space Agency has processed the image to bring out details of the comet’s activity, and you can see that around the illuminated side of the nucleus. This breathtaking picture shows different regions of the comet, including Hapi in the foreground, and the steep cliffs of Hathor as well as the region’s transition into Anuket. This comet model shot is 11 kilometers (or about seven miles) across.
art
comets
F-22 Raptor
Florida
galleries