China just flew a 130-foot, solar-powered drone designed to stay in the air for months

The CH-T4 has already set a national flight record. 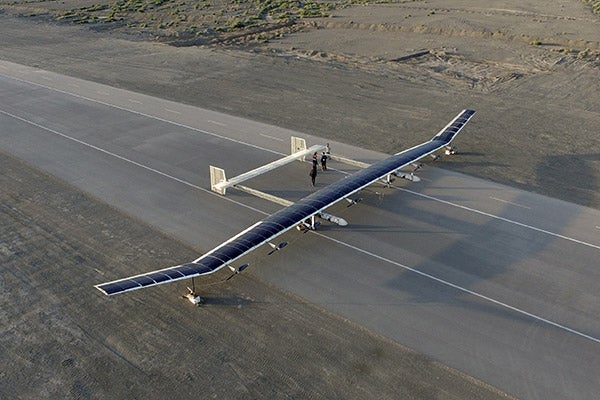 Meet China’s huge solar-powered drone, a 130-foot-wide machine designed to fly at more than 65,000 feet, for days on end. How? A super lightweight body and renewable energy tech that can power all eight of its electrical propellers.

The “Caihong-T 4” (CH-T4), built by the Chinese Academy of Aerospace Aerodynamics (CAAA), has a double-bodied fuselage, cranked wing, and twin tail. It’s got a wingspan of 40 meters—or about 130 feet, which means its wider than a Boeing 737 jetliner. Despite the large size, it weighs between 880 and 1,100 pounds. It owes its this lightness to its carbon fiber and plastic components.

In size and flight altitude, that’s second place to only the NASA Helios Prototype, another solar-powered flying wing, which boasts a 246-foot wingspan, and a elevation of 96,863 feet. CAAA scientists told the China Daily that the CH-T4 has a flight time design goal of several months, needing only minimal human supervision. Flying up to 65,000 feet means that the CH-T4 will fly above almost all cloud cover, so it will enjoy almost unlimited access to sunlight during its operations (during night, the CH-T4 will draw from onboard batteries to power its motors).

China’s long-duration drone projects parallel work at both DARPA and tech companies like Facebook. For militaries, tech like this provides an excellent platform for surveillance missions against military and terrorist targets. It can utilize its high flight ceiling to maintain line-of-sight contact with over 400,000 square miles of ground and water. That’s about the size of Egypt. For both militaries and tech firms, covering so much territory makes it an excellent data relay and communications node. This will allow the drone to replace or back up satellite communications, maintain coverage between distant aircraft and ships, or even provide broadband to rural Chinese households.

While conversations around drone usage are often limited to their roles as potential missile-toting killers and parcel-delivering quadcopters, some of the most important drones of the future may be those like the Caihong X and Helios Prototype, unseen and high up, gathering data day in and day out.