What Is NASA Doing With This Second-Hand Armored Car?

From insurgency to emergency 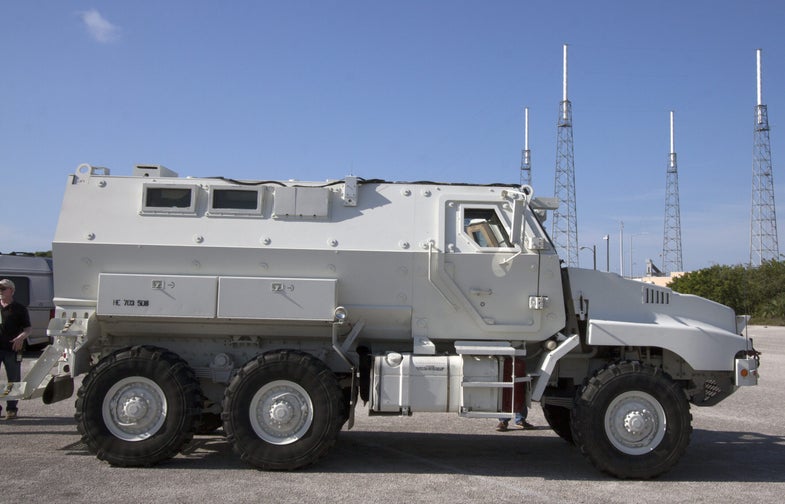 NASA, every space cadet’s favorite four-letter acronym, just got some second-hand wheels. Announced last week, NASA is testing an MRAP, or “mine resistant ambush protected” vehicle, at its Cape Canaveral site. Developed and rushed to the field during the Iraq war, MRAPs are made to survive and fight insurgencies, and have seen action in Iraq and Afghanistan. So what’s NASA doing with one?

The answer, fortunately, is not a live-action “War of the Worlds”. As far as we know, there isn’t a Martian insurgency in Florida. Instead, the MRAP is a safety precaution, should disaster strike the launch pad–for example, if a rocket is about to blow up. MRAPs are heavy, weighing in at around 45,000 pounds, and their armor is thick. This is important for war, but it also means that if astronauts have to get off the launch pad quickly, the MRAP can function as a moving bunker, traveling between 45 and 50 mph.

MRAPs will replace NASA’s Vietnam-era M113 armored vehicle. M113s weigh about 27,000 pounds, and their speed tops out at around 42 mph. The MRAP is faster and more heavily armored, but the biggest improvement is perhaps in the controls. The M113 has tank controls, which is fine for the military, but it means that someone running away from a burning rocket is less likely to know how to drive it. The MRAP, instead, drives basically like a truck, so it’s much easier for whoever’s in the driver’s seat.