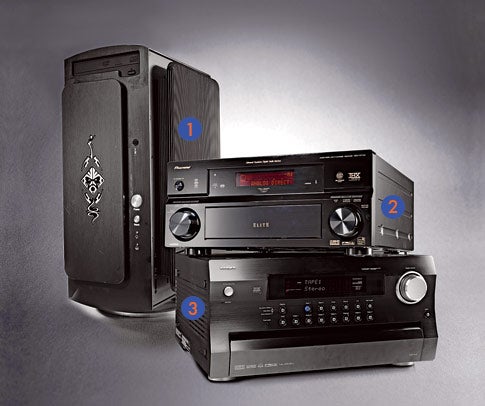 It’s been the same story since the ’60s. The home-audio receiver is a rectangular box whose primary purpose is to amplify and control the sound-and now video-coming into your living room. Aside from the notable addition of surround sound and digital inputs such as HDMI, this home-entertainment nerve center has endured a rather stagnant existence. But that’s about to change. These receivers satisfy your desire to access thousands of songs stored on your portable player, to place a PC next to your TV, and to add the features you need without paying for ones you don’t. Sure, they’re still relatively rectangular, but at least they’re a little less square.

Voodoo’s Epic stores music and movies, and acts like a TiVo. Cool. But the features that really make this media-center PC uniquely suited to home-theater use are its built-in amplifier and totally silent, fanless operation. The Epic sits on a rotating pedestal for easy rear-panel access and comes with either a stereo or a 5.1-channel amp (both 25 watts per channel), a choice of processors, disc drives, audio and video cards, and up to a
terabyte of hard-drive space.

Bridging the chasm between portable audio players and home-entertainment systems, Pioneer’s Elite VSX-74TXVi is the first home-theater receiver to embrace the iPod. Connect an iPod using a cable (which also charges its battery), then control it using the receiver’s remote and on-screen display. The receiver up-converts the iPod’s compressed music to audiophile quality (192-kilohertz, 24-bit audio) and can further augment it using the receiver’s various digital-sound-processing circuits or convert it into multichannel surround sound. Bonus: It’s XM-ready.

Worried about obsolescence? Then get online and customize Integra’s DTR-10.5. Choose up to five plug-and-play cards that fit into slots in the rear. All receivers come with four modules: digital audio; analog audio; a video card with composite, S-video and component HD inputs; and an AM/FM tuner. Fill the remaining five slots with extra audio and video cards. The payoff: When it’s time to upgrade, you’ll spend a few hundred dollars on modules instead of a few thousand for a new receiver.