Move over, Alienware. This three-podded gaming PC might be the craziest and coolest-looking desktop yet. 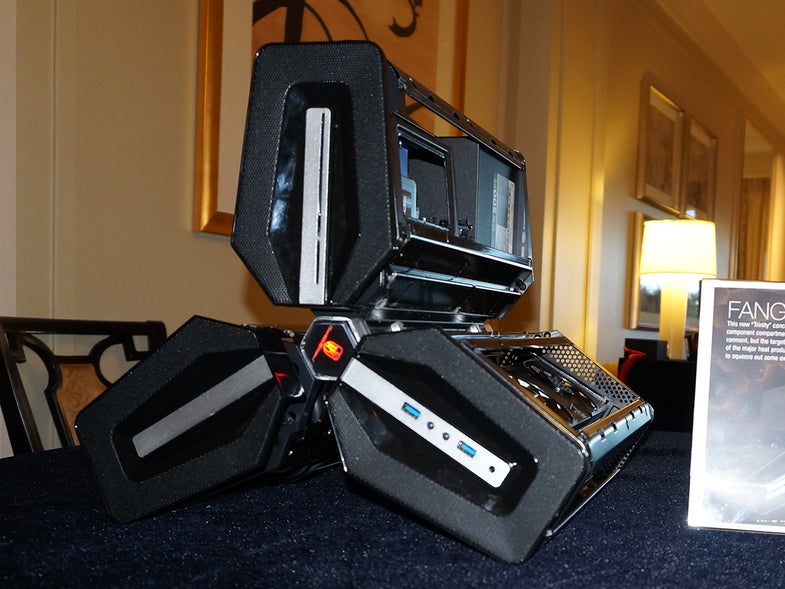 Unusual desktop PCs are common at shows like CES, but the Fang Trinity is the most eye-catching system to surface in several years. Built in collaboration with Shenzhen-based case maker Deepcool and the boutique system builders at CyberPowerPC, it looks like something you might stumble over in a Ridley Scott—esque future. It’s about as far from a boring tower as you can get.

Despite its odd shape, the Fang Trinity manages to house standard off-the-shelf PC components, all shoved into one of three pods. One has room for a massive foot-long graphics card, an intake fan, and up to five solid-state drives. Another hides the power supply, an optical drive, and two hard drives. The third houses the processor, a compact Mini ITX motherboard, and even a liquid cooler and fan. Cables to connect everything together are pre-routed through the central hub, and each pod is sealed off with a heavy steel shell. A lighter aluminum-based model may come later.

Of course, those looking for truly unique PC builds always pay a premium, and the Fang Trinity is no exception on that front. The case alone is expected to sell for about $350 when it goes on sale sometime around the middle of 2015. Want a fully-built PC packed in the case? CyberPowerPC says pricing will start at a somewhat reasonable $999 for an entry-level configuration. But if you want a high-end graphics card, CPU, and all those drive bays populated, expect to pay somewhere in the neighborhood of $4,000. We’re sure Ridley could afford a few for the promised Blade Runner sequel.