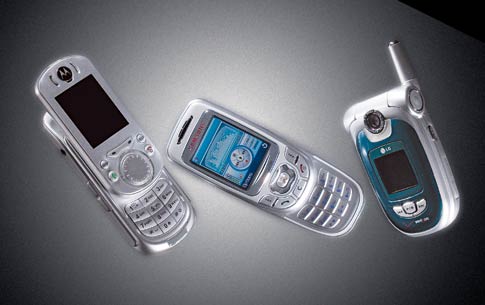 The next time someone asks who´s on the line, you can say it´s Bono, because 2005 is shaping up to be the year of the music phone. Previously, phones that played music had limited storage, and queuing up a song was cumbersome. But as carriers roll out MP3-friendly high-speed cellphone networks, phone manufacturers have been inspired to boost memory and design phones with dedicated play buttons, built-in speakers, FM transmitters and graphic equalizers. In other words, they´re functional MP3 players. Before too long, you´ll be able to download songs directly to your phone, wherever you are, in less than a minute. Motorola announced that it will release a phone that works with iTunes this year, and a slew of competing services are expected to follow. By year´s end, every major handset manufacturer will offer tune-centric models, including Sony Ericsson´s Walkman W800 and Nokia´s N91-which will have a whopping four gigabytes on board-along with the ones on this page. Here are a few of the best you´ll soon be able to get your hands, and ears, on.