This electric car was cutting edge in 1908. What’s it like to drive it?

It was almost the Tesla of the 20th century. 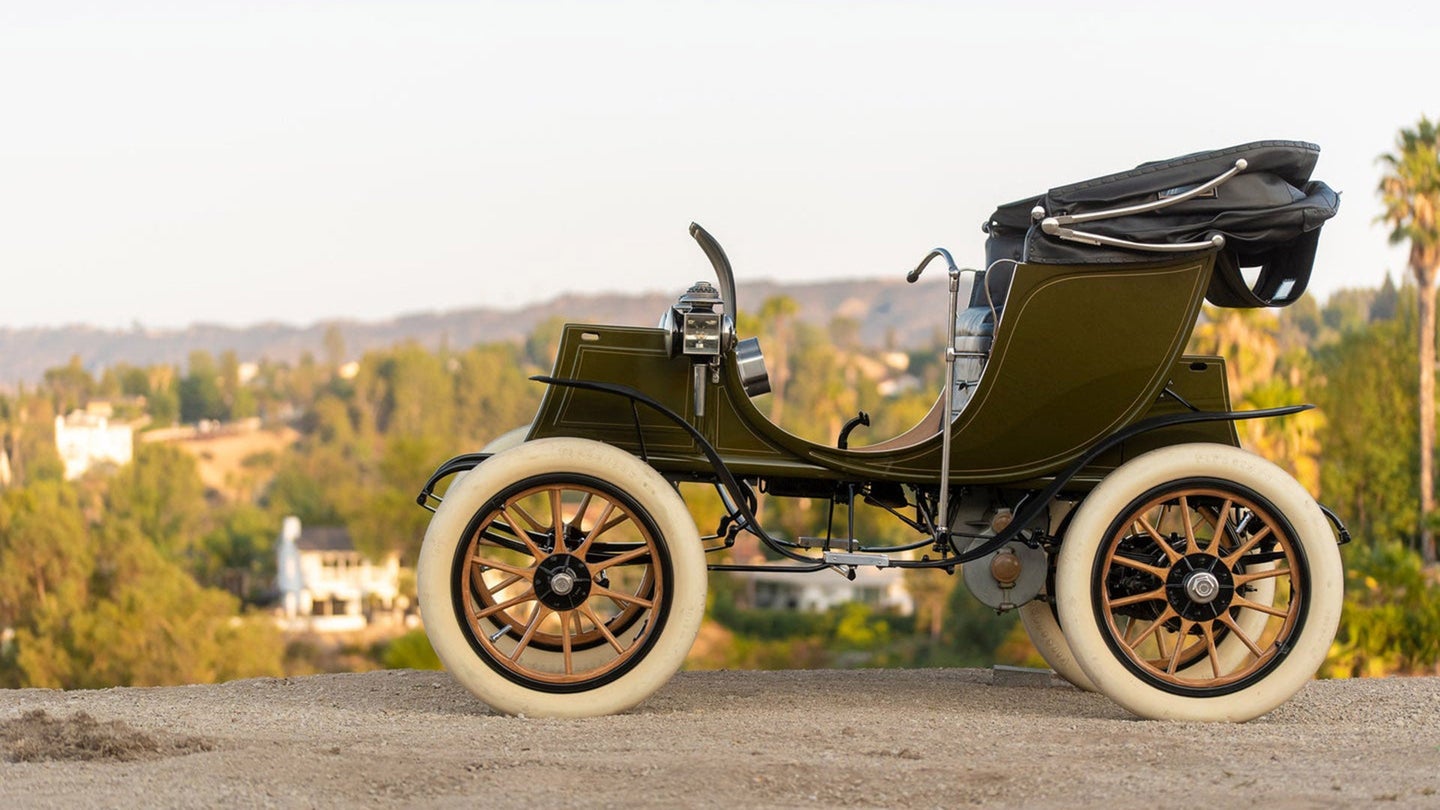 This story is excerpted from The Drive.

Electric vehicles are a much more long-standing tradition of car culture than we often give them credit for. Ask someone the first EV that pops to mind, and the usual responses will be from the past couple of decades—the original Tesla Roadster, perhaps the late 1990s GM EV1, maybe in rare cases the awkward ’70s wedge-shaped Comuta-Car. But well before any of these modern electric cars were dreamt up, there was a battle between EVs and ICE cars that was so fierce it made today’s market look like a church bake sale.

We know how it turned out: The gas stations situated on every highway and thoroughfare throughout the country compared with often pitiful and scant electric charging infrastructure is proof that gasoline won the first battles. But it wasn’t for a lack of effort or well-built cars.

This is a 1908 Columbia Electric Victoria Phaeton. Built by the Columbia Automobile Company, it represents the final glory days for a marque that once was poised to become an automotive Goliath on par with General Motors, and instead ended its history as a bankrupt footnote just four years after this carriage rolled off the assembly line.

It’s rolling, driving proof that there was a vibrant electric vehicle market over a century ago—although it’s more appropriate to call it an electric horseless carriage than a car.

Penthouse to the pavement

To fully appreciate this car—and understand how a company that was the first to ever sell 1,000 cars in a year, everbecame little more than a niche curiosity—some background is necessary.

At the dawn of the 20th century, there existed three options to propel a carriage that wasn’t a horse: steam, gasoline, and electricity. Steam was popular for its familiarity. Steam for power generation had been in use for decades at that point, but steam power requires a massive, high-pressure boiler (known for its propensity to explode), onboard water storage or an expensive and high-maintenance condenser, and immense amounts of time to get a motor actually running. Starting a steam car could take over 45 minutes on a cold day.

Believe it or not, gasoline cars were not much better in the early 1900s. Before the invention of conveniences such as the electric starter (patented in 1903 and implemented for the first time in 1912 by Cadillac) or the muffler (invented in 1899 by Columbia’s own Hiram Percy Maxim, the same man that invented the first working firearm silencers), gasoline-powered cars were extremely dirty, loud, and difficult to operate.

A misfire while hand-cranking could easily result in a broken arm or dislocated shoulder, and even when early internal combustion engines worked perfectly, hand-cranking required enormous amounts of strength and effort to overcome the inertia of enormous pistons and relatively high compression.

Juxtaposed against these two inconvenient, dangerous propulsion mechanisms, electric cars were massively popular. They benefited from the same attributes that have made them popular in their resurgence in recent times: They promised maintenance-free, silent, clean operation, and a fully contained and reliable source of power that required very little effort to run.

Charging, amazingly, was straightforward as well, with home charging stations available for owners with their own parking spots or “electric garages” that offered vast recharge stations to owners who couldn’t justify their own in-home unit. By 1900, with 4,192 known registered vehicles on the streets of America, over 1,500 of them were early EVs, versus the less than 1,000 internal combustion engine-powered vehicles.

And despite this fiercely competitive nascent market—there were over 2,000 companies building cars in America from 1900 to 1919 in some form—Columbia was an early dominant name. The company originally started when its founder, Albert Pope, turned to automobile production in the early 1890s after making his fortune in bicycle manufacturing after the end of the Civil War. As bicycle demand finally began to evaporate and cars became more commonplace, his company built its first EV prototype in 1896 and was producing roadworthy consumer models by mid-May of 1897.

Accolades quickly followed. By 1900, Columbia set the record for the furthest range ever achieved with an electric car, driving 96 miles on a single charge with an early Runabout model. By 1902, it had become the first manufacturer to deliver over 1,000 cars in a year, beating Oldsmobile to the sales record.

Not content with simply producing and setting records with electric cars, in 1904, its 30 horsepower, gasoline-powered car set the record for a Chicago-to-NYC drive in a scant 58 hours, 35 minutes—a 13-hour improvement over the previous record, with an average speed of 24 mph.

If speed wasn’t impressive enough, the people choosing Columbias were. Teddy Roosevelt became the first president with a motorcade in 1902 and rode in a Columbia. Even Queen Victoria purchased a Phaeton carriage for her daughter-in-law, Alexandra of Denmark, to drive herself around the grounds of her sprawling manor. By this point, you’d be forgiven for thinking that Columbia would dominate the American auto industry for decades to come.

Unfortunately, Columbia started running into financial issues as the decade wore on, spurred on by poor management and an inability to update its models rapidly enough for the quickly changing market. By 1910, the company had fallen into receivership, and by 1913, the holding company it had reorganized under, the United States Motor Company, a conglomerate meant to take on General Motors, had collapsed completely. Columbia never made another car.

Read about what it’s like to be behind the wheel of the Phaeton over at The Drive.

Correction (November 3, 2021): This story was corrected to note that Columbia set the long-distance driving record with a 30-horsepower car, not 300-horsepower. The caption on the photo was also updated to note that the modern EV is a Chevy Bolt, not a Nissan Leaf (an editing error).