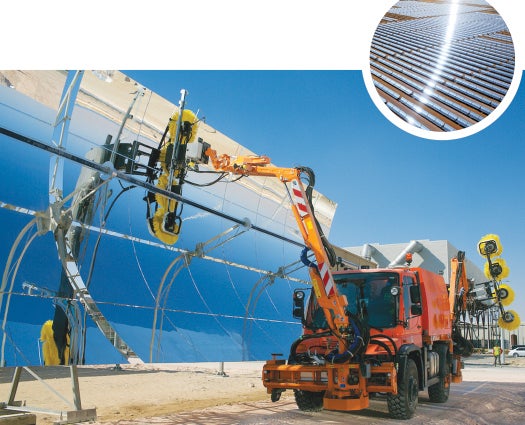 Because of its cloudless skies and favorable latitude, the Rub’ al-Khali desert in the United Arab Emirates is a good home for the world’s largest operational concentrated solar plant, the eight-month-old Shams 1. Its 258,048 parabolic mirrors reflect sunlight to heat water into steam to turn a turbine, generating 100 megawatts. But in addition to plenty of high-intensity sunlight, there’s also plenty of, well, sand, and if the mirrors get too dusty, the plant’s efficiency dramatically decreases. That means a lot of cleaning. Special trucks take three days to clean the nearly seven million square feet of mirror surface area. Scrubbing happens after the sun sets, and it’s almost entirely automatic. The operator pulls up to a row of mirrors and pushes a button to extend the truck’s robotic arms. Radar sensors detect how close the mirrors are to the arms, which stretch accordingly. Then, the operator turns on the water, sets the brushes spinning, and drives at about two miles per hour, polishing away.