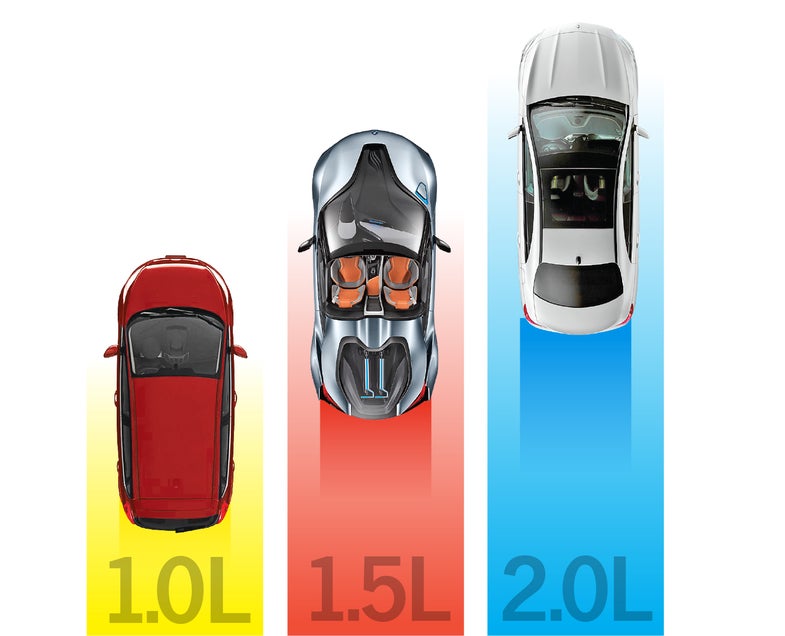 Last summer, the Environmental Protection Agency and the Department of Transportation threw down the gauntlet: They set a new standard that will require the average car to run at 54.5 miles per gallon—nearly double today’s average—by 2025. Carmakers could reach that goal the easy way, making vehicles smaller and lighter but, at the same time, less powerful. Instead, several are getting there the hard way, building pint-size engines that squeeze out as many horses as their beefier predecessors.

Turbocharging and direct fuel injection helped Ford engineers to get 123 horsepower—a healthy amount for a compact—out of the Fiesta’s tiny 1-liter engine. The four-door hatchback or sedan will clock more than 40 mpg on the highway. $15,800 (est.)

The i8’s three-cylinder, 1.5-liter engine, called the B38, cranks out 220 horsepower. An electric motor on the drivetrain adds a jolt of acceleration that propels the car from zero to 60 mph in 4.6 seconds. Analysts expect that the engine, which helps the i8 peak at 80 mpg, will also power the next-generation Mini and 1-series coupe. $125,000 (est.)

The 2-liter M133 engine in the AMG produces 355 horsepower, a record output-to-displacement ratio for any engine. A twin-scroll turbocharger adds 26.1 pounds per square inch of engine pressure, which sends the compact sedan from zero to 60 in 4.5 seconds. Even with all that power, it should approach 30 mpg. $48,375