From Jaguar, A 495-Horsepower Monster

Can the long-awaited E-Type successor live up to its lineage? 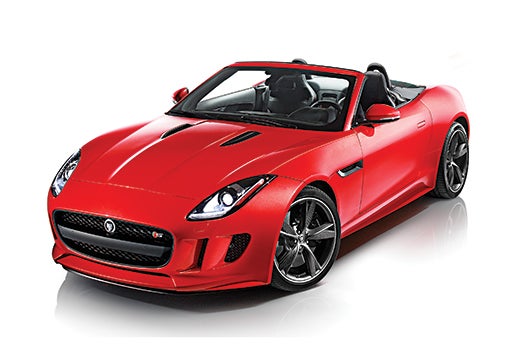 In 1961, Jaguar debuted the E-Type, a road-ready two-seat version of the company’s champion racecars. It quickly became legend, praised by Enzo Ferrari as “the most beautiful car ever made.” But in 1974, Jaguar discontinued the E-Type and shifted its focus to genteel luxury coupes and sedans. This summer, the company will resurrect the two-seater in the F-Type, which features a 495-horsepower engine, adaptive controls, and, of course, a look reminiscent of its beloved predecessor. Even against Porsche and Corvette, which have been consistently updating their sports cars in the interim, the F-Type does plenty to make up for the 40-year hiatus.

The 564-pound aluminum chassis is Jaguar’s lightest to date. An active rear spoiler deploys at speeds above 60 mph and generates 264 pounds of downforce to keep the comparatively light F-type close to the road even at the highest speeds. Designers looked to reduce drag everywhere they could; for example, the door handles retract when they’re not needed, smoothing airflow.

Jaguar will release three F-Type variants, the most powerful of which squeezes 495 horsepower out of a 5.0-liter supercharged V8 engine. Dubbed the F-Type V8 S, the car goes from zero to 60 in just 4.2 seconds and has a top speed of 186 mph. (The base V6 model tops out at 161.)

Designers gave the F-Type an intelligent eight-speed automatic transmission. The system tracks conditions and driving style—how a driver accelerates, brakes, and takes turns—and selects one of 25 preprogrammed shifting models. By monitoring G-forces, for instance, the transmission knows that it should hold off on an upshift until the car exits a turn.

A double-wishbone suspension logs chassis motions 100 times per second and steering inputs 500 times per second, so it can adjust individual shocks to keep the car level and the ride smooth. The system knows, for example, that much of the car’s weight will wind up on the front-right tire during a left turn and stiffens the shocks accordingly.

Owners can create custom settings in the F-Type to match their driving habits. Using a touchscreen on the dash, they can save presets that soften or stiffen the steering and suspension, adjust the shifting sensitivity, and modify engine responsiveness. The F-type’s “dynamic launch control” also times the throttle to create drag-strip starts with a single button push.