Hyundai Made A Flying Car (Sorta)

It is impractical! And cool! And we would like to fly it. 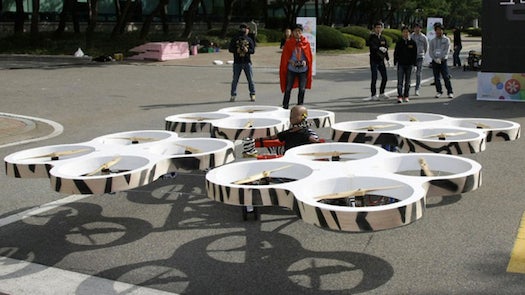 For Hyundai’s annual Idea Festival–a Wacky Races-style competition where engineers show off the most bonkers ideas they can dream up–a team unveiled this crazy flying car. Basically, it’s a multirotor drone, except with a driver’s seat and 16 rotors instead of the more conventional four.

So “car” is kind of a loose term here: it’s not even being piloted by the person in the cockpit; someone with a remote control is standing by. (Hopefully someone the guy in the cockpit trusts.)

Yes, cool, but just remember this is part of a swarm of inventions from Hyundai’s futuristic Idea Festival. Meaning you’re not going to be signing up for a flying car soon.

Darn. So close. Until it’s the future, see the car in action below (it comes in at about 53 seconds in).