The Dubai Police Are Getting A Lamborghini

And we are understandably jealous 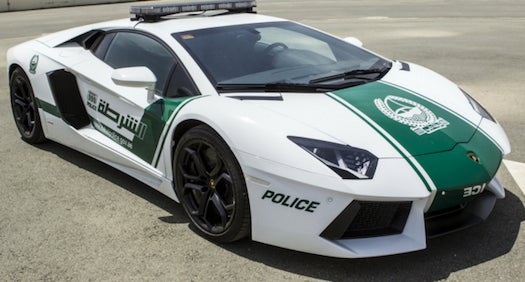 A handout picture released by Dubai police on April 11, 2013 shows the police department's new patrol car, a especially modified quarter-of-a-million dollar Lamborghini Aventador, in the Gulf emirate. The introduction of the sports car, which can reach speeds of up to 349 km/h (217 mph), aims to make justice quicker on Dubai's dangerous highways. AFP PHOTO/HO/DUBAI POLICE == RESTRICTED TO EDITORIAL USE - MANDATORY CREDIT "AFP PHOTO/HO/DUBAI POLICE" - NO MARKETING NO ADVERTISING CAMPAIGNS - DISTRIBUTED AS A SERVICE TO CLIENTS ==HO/AFP/Getty Images. HO
SHARE

Are the Dubai police looking for additions to their squad? Because we could use an excuse to drive this Lamborghini Aventador, which the city of Dubai has given to its force.

The 217 mph machine costs about $400,000, making it, uh, high-end, to say the least. The oil-rich Dubai (with its awesome buildings) can probably afford it, and that oil might also help offset the car’s fuel costs: as Yahoo! Autos points out, police cars spend most of their time idling, waiting for a crime, which makes this behemoth a gas-guzzler most other countries wouldn’t have much reason to invest in.

So the question now is: Will this turbo-charged vehicle strike fear into the hearts of would-be criminals, or will they commit a crime just for a ride in the backseat?