A deer detector could be next. 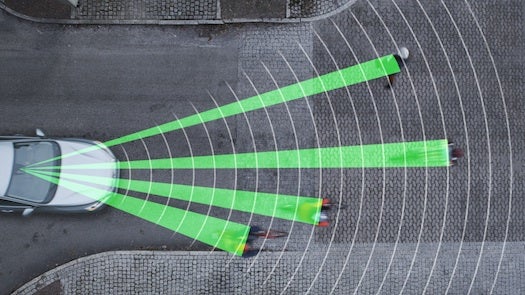 This could be helpful no matter what side of the wheel you normally find yourself on. Volvo has built a system that automatically detects bicyclists. If the driver is on a collision course, the system sounds an alarm and brakes, the BBC reported.

The cyclist-detector works with a similar, pedestrian-avoiding feature that Volvo began offering as as an option in 2010. A radar in the car’s grille calculates the distance between the car and objects in front of it, while a camera in the rearview mirror figures out what type of objects are in front of the car.

Spotting cyclists is more difficult than detecting pedestrians, however, so the new system uses a more powerful processor, the BBC reported. That means those who already own people-sensing Volvos can’t simply get a software upgrade. The cyclist feature will be built into certain new models of Volvos that will be available starting in mid-May. It’ll cost at least $2,787 (1,850 British pounds).

Next up, the company wants to make a system that’s able to detect deer and other animals.