The Cadillac version of Chevrolet’s plug-in hybrid is finally on its way. 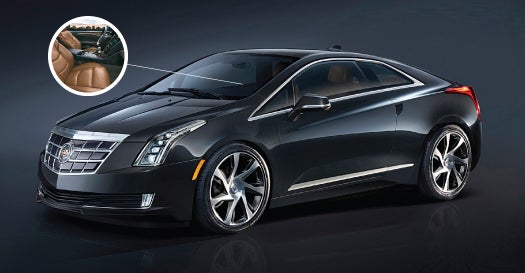 In January 2009, General Motors unveiled the luxury cousin of the Chevrolet Volt—the Cadillac Converj concept. Yet almost immediately, GM started sending mixed signals. One moment the Converj was approved for production; the next it was on hold. Finally, at the most recent Detroit Auto Show in January, GM revealed the car the Converj had become: the 2014 Cadillac ELR. The two-door plug-in hybrid pairs a powertrain pulled straight from the Volt with Cadillac styling and a high-toned interior. The car is scheduled to go into production late this year. But it’s still unclear how committed to it GM actually is. At the Detroit show, group vice president Bob Ferguson insisted that the ELR will be built only in very limited numbers. But if drivers embrace the car, GM executives almost certainly will as well.

The ELR runs on GM’s Voltec powertrain—a lithium-ion battery pack and a pair of electric motors mated to a backup gasoline engine. The specs are also extremely Volt-like: roughly 35 miles of all-electric range from the 16.5kWh battery before the 1.4L gas engine kicks in. Total driving range: about 300 miles. And with 295 foot-pounds of nearly instantaneous torque, the ELR should be even more fun to drive than the surprisingly nimble Volt.

The sharply angled body and 20-inch wheels are for show, but the LED headlamps increase efficiency, and the hidden door handles and other exterior design tweaks give the ELR a respectably aerodynamic coefficient of drag of 0.305—only slightly less slippery than the Volt.

Like the 2013 Volt, the ELR has a “hold mode,” which allows drivers to reserve remaining battery charge for later use—say, for when it’s time to leave the Interstate and drive around town, where battery power stretches farther.

Designers replaced the Volt’s much-maligned iPod-looking center stack with leather and wood. The ELR comes standard with Cadillac’s CUE system, which in addition to the usual navigation and stereo options will deliver information on driving efficiency, energy use, and charging options.

With Regen on Demand, drivers can use steering-wheel-mounted paddles to quickly adjust the strength of the regenerative braking system. For example, it’s possible to quickly switch to heavy regeneration on a long downhill stretch to save brakes while recharging the battery.