The prevention system detects no-entry signs and issues acoustic and visual warnings to the driver. 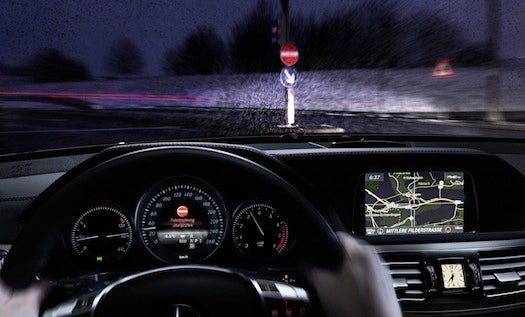 While it may seem like an unlikely occurrence, cars traveling in the wrong direction of traffic is becoming more and more prevalent. Just last year for example, even we reported on two such occurrences, one taking place in Mississippi and the other in Washington.

Unfortunately, the infrastructure required for such systems to work outside of the lab isn’t ready just yet, although much work in this area is taking place.

Since then Mercedes-Benz has come out with an alternative solution, one that will feature on its 2014 E Class and 2014 S Class models due out later this year. The system will initially be introduced to the German market, though Mercedes is working on adapting the system for use in other countries.

Mercedes’ wrong-way driving prevention system relies on its existing traffic sign assistance system, which can now detect no-entry signs and issue acoustic and visual warnings to the driver should he or she stray onto the wrong side of traffic flow.

A common cause for wrong-way driving are highway ramps, where drivers either make a mistake, are distracted, or confused by complicated road designs and navigation instructions. Mercedes says its system is ideal in these situations as it will be able to warn drivers should they violate traffic regulations and ignore no-entry signs.

The technical core of the system is a camera on the inside of the windscreen. It can visually identify no-entry signs and send the information obtained to the computer in the on-board electronics. If it detects that the vehicle is about to pass the relevant prohibitory signs and is entering a highway ramp, the system warns the driver. Three loud beeps are issued and a red no-entry symbol lights up in the display in order to make the driver aware of the danger.

In order to further improve the reliability of the system, the electronics compare the data from the camera with data from the navigation system. It will also detect other signs such as speed limits and no-overtaking. The only downside is that poor weather, such as heavy snow, can render the system unavailable.