Detroit Auto Show 2013: Nissan Leaf Is Now Cheaper, Made In The U.S. 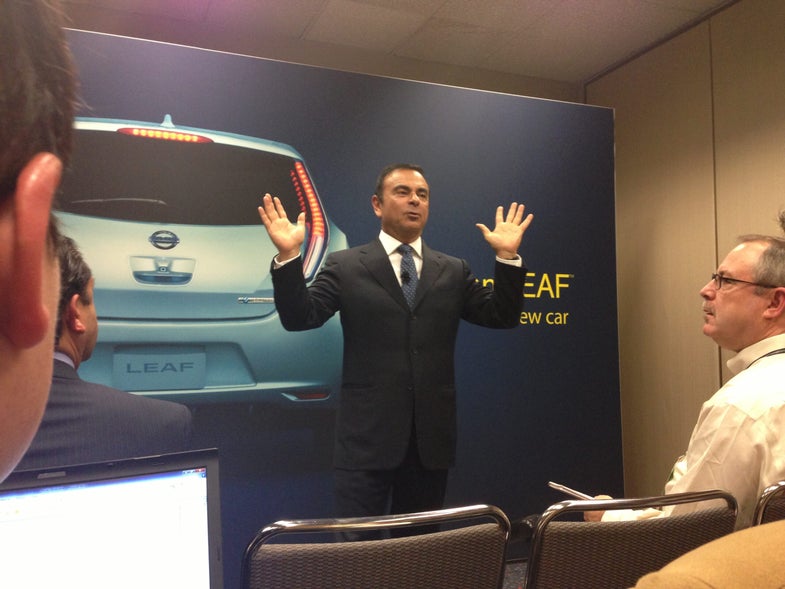 Not that he’s known for anything else, but Nissan CEO Carlos Ghosn once again aggressively underscored his company’s commitment to electric vehicles by dropping the MSRP on the 2013 Nissan Leaf by 18 percent. A newly added S trim level of the five-seat EV will now start at $28,800 which means a net price in the high teens in states that offer supplemental incentives to the $7500 federal tax credit. Nissan is also offering a 36-month lease on the Leaf at $199/mo, far below other vehicles in that price range.

At least part of the lower price is due to the fact that, for the first time, the Leaf will be produced domestically, in a new LEAF production facility in Smyrna, TN. Ghosn demurred on a sales goal for 2013 model, but noted that it was fair to assume it would be “at least 20 percent higher” than 2012.

Meanwhile, Global Vice President of Leaf Sales Billy Hayes was quick to remind what really draws buyers to electric vehicles like the LEAF. “We get so caught up in talking about the technology and the green” he said, “but the car is really great to drive.”