Innovations in Driving: How The Rubber Met The Road

A short history of the tire 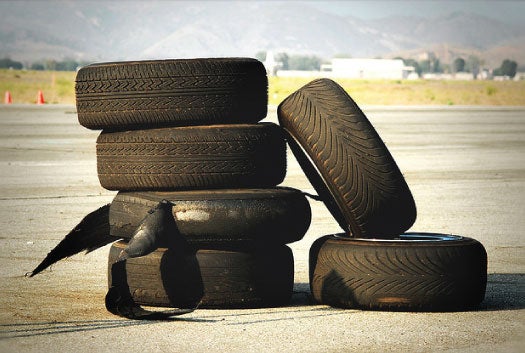 Tires are where the rubber meets the road–literally. So you could argue that they’re the single most important factor in determining how a car handles. Yet conceptually, at least, they’ve changed remarkably little since the dawn of the automobile.

Go to 2:40 of this video to see why racing with worn-out tires is a bad idea:

A necessary precursor to the development of the modern tire was George Goodyear’s invention of the vulcanization process–which transforms rubber into a hard and durable material–in the mid-19th century. Toward the end of the century, Irish veterinarian John Boyd Dunlop developed the first practical pneumatic tire, which encases compressed air inside a tube protected by an outer shell. But he did this not for a car but a bicycle. (Apparently, his son got headaches from riding over bumpy roads on his solid-tired bike.) So it remained for the Michelin brothers to fit pneumatic tires to a car for the first time. And to demonstrate this groundbreaking technology, they raced the car in the Paris-Bordeaux-Paris road race in 1895.

Early on, tire manufacturers hit upon the basic construction technique that’s used to this day. Cords, or plies, of a relatively inelastic material are embedded in the rubber of the carcass to limit how much it can deform under load. A century of ago, the plies were woven out of natural fibers, such as cotton. Now, synthetic materials and steel belts are commonplace. In the beginning, the standard practice was to cross the plies on a bias. The tires, therefore, were known as bias-ply or cross-ply tires. But in 1948, Michelin pioneered a technique of arranging the plies at a 90-degree angle to the direction of travel, and the radial tire was born. Radials ride more stiffly and are more expensive to produce than bias-ply tires, and Goodyear and Firestone resisted the new technology for several decades. But radials offer better handling characteristics and improve fuel economy. So by the 1980s, radial tires had become standard equipment for all new cars, though bias-ply tires continue to be made for vintage cars.

Dunlop’s put together a slick animation showing a century of progress:

Michelin is also behind another innovation that may fundamentally change the tire. The goal is an airless tire that the company has dubbed the tweel. According to a corporate video the tweel consists of a “composite rein-forced tread-band connected to a flexible wheel with rectangular polyurethane spokes.” Of course, Michelin has been working on it since 1995, and it’s still not ready for prime-time. So it may well be that the foreseeable future of the passenger-car tire isn’t much different than the past.