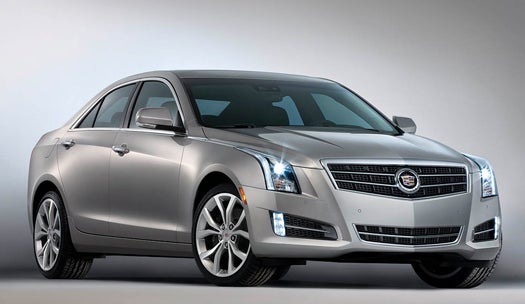 Long a purveyor of lumbering land barges, Cadillac has released its first compact sedan in more than 30 years: the ATS. Engineers designed the ATS to compete with BMW’s renowned 3-Series. To make it fast and agile, they replaced heavy steel components with aluminum, drilled “lightening holes” in structural parts, and slimmed down the fasteners that hold components together. Then they added the gadgetry, including seats that vibrate to deliver safety warnings and a capacitive navigation screen that pulses upon touch.

Feedback screen
With Cadillac’s CUE system, the driver controls the console’s central touchscreen as he would a smartphone—by sliding, tapping, and pinching. To let the driver feel what he’s doing, the capacitive screen delivers fingertip pulses when he presses a button or operates a slider. Meanwhile, natural-voice-recognition software makes it easy to give vocal commands.

Helpful vibrations
When the cameras and sensors mounted around the car detect that a driver is straying from his lane or veering toward an obstacle, motors in the seat-cushion vibrate on whichever side requires the driver’s attention. Threats from the front or rear trigger pulses in both sides of the cushion.

Quick-change suspension
Cadillac pioneered driver-adjustable magnetic suspension, which uses magnetically charged fluid (rather than mechanical shocks) to absorb blows from the road. Changing the stiffness of the suspension is just a matter of adjusting the strength of the magnetic field, which the driver can do by pressing a button.

Compressed power
A turbocharged, 272hp 2.0-liter four-cylinder pushes the ATS from 0 to 60 mph in 5.7 seconds while still getting 32 mpg on the highway. (The base model comes with a 2.5-liter four-cylinder; a 321hp, 3.6-liter V6 is also available.) Bose active noise cancellation quells unwanted sound from the engine compartment by transmitting a canceling frequency through the audio speakers.