Relax your hands and feet while this car drives for you 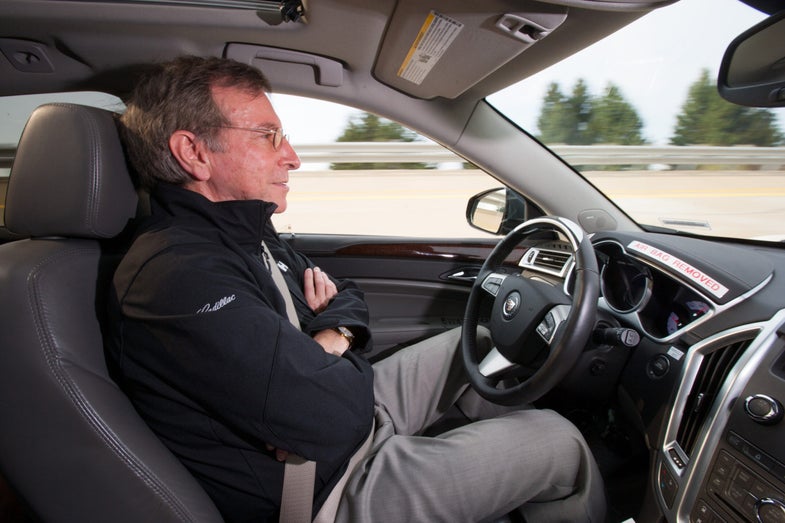 General Motors Staff Researcher Dr. Jeremy Salinger road tests a Cadillac semi-autonomous driving technology it calls ÒSuper CruiseÓ that is capable of fully automatic steering, braking and lane-centering in highway driving under certain optimal conditions Friday, March 23, 2012 in Milford, Michigan. Super Cruise is designed to ease the driverÕs workload on the freeway, in both bumper-to-bumper traffic and on long road trips by relying on a fusion of radar, ultrasonic sensors, cameras and GPS map data. The system could be ready for production vehicles by mid-decade. (Photo by John F. Martin for Cadillac). John F. Martin
SHARE

Though driverless cars are making plenty of inroads, it may be awhile yet before people are willing to hand over the keys and let their cars take over entirely. But a few autonomous functions may make the transition smoother. Cadillac is testing lane-detection and automatic braking technology for use on highways, according to General Motors.

Much of this technology forms the basis for Super Cruise, which basically gives the car more responsibility. Moving from simple lane-drift warnings to self-adjusting lane centering tech is the next step, Cadillac says. Future models will have cameras to detect lane markings — which must be pretty bright and distinctive to work — and GPS data to detect and prepare for road curves and obstacles. It may not work when it’s raining or when lane markers are unclear, however.

Combined with the self-centering lane tech and automatic braking, highway commutes could be entirely car-operated. The technology would “lighten the driver’s workload,” as GM put it in a news release. Personally, I don’t consider driving to be a lot of work — I kind of enjoy it — but maybe the typical luxury-car-buyer would find it a plebeian chore.

As we’ve seen before, Cadillac is not the first luxury carmaker to adopt this technology — Mercedes is using cameras, radar and other sensors on some of its vehicles. GM says the highway-driving cars could be available by mid-decade.