The Nissan Leaf can run 70-plus miles on a single charge. Now, it can also power a family home for... 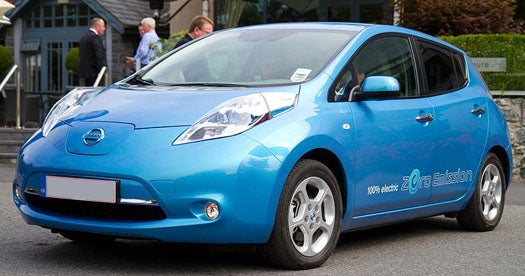 The Nissan Leaf can run 70-plus miles on a single charge. Now, it can also power a family home for two days if it needs to. The “Leaf to Home” project Nissan is rolling out in Japan allows the electricity stored in the Leaf’s lithium-ion battery to be fed back into a home, running major appliances for up to two days.

The “Leaf to Home” system simply allows for a quick charging port to be mounted on the home’s electricity distribution panel to receive energy from the car. Those 24 kilowatt hours stored in a fully energized Leaf can run the average Japanese household for two days, even when the refrigerator, climate control, and other large appliances are running at the same time.

Given that Japanese communities are still dealing with the effects of the disastrous March earthquake and associated tsunami, its not hard to imagine how households might need a source of backup power, or how valuable that backup power might be during a bad situation. Some areas in Japan were left without electricity for days and days in the aftermath–a problem “Leaf to Home” could remedy, at least for a time. Not to mention, in addition to serving as a backup power source the system allows the car to store up power during off-peak electricity generation hours and feed it back into the house during periods of high demand.