Building Wi-Fi That Works at 800 MPH, Into a Car Designed to Break the Sound Barrier

Discovered during a dig through the FCC’s experimental radio applications by Steven J. Crowley, it has come to light that... 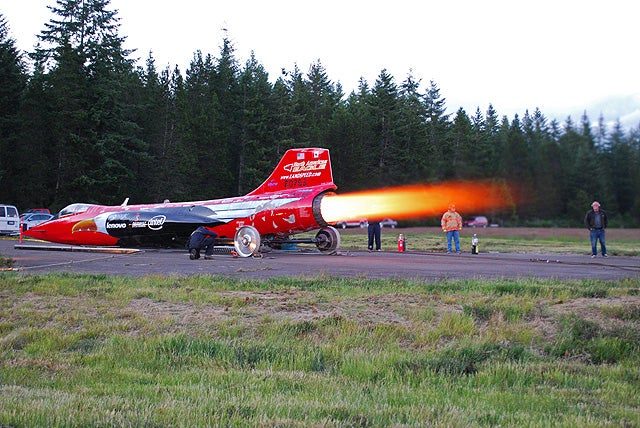 Discovered during a dig through the FCC’s experimental radio applications by Steven J. Crowley, it has come to light that North American Eagle is trying to install what will presumably be the fastest-moving Wi-Fi network on the ground–because it’s being built inside a vehicle designed to break the world land speed record (and the sound barrier) at 800 miles per hour.

North American Eagle’s latest vehicle is basically a converted Lockheed F-104 jet, 45,000 horsepower turbo jet engine and all, designed to travel on land rather than in the air. At 56 feet long, the vehicle weighs about seven tons and blasts a 20-plus foot plume of fire upon hitting maximum afterburner, so it’s not surprising that it’s designed to break the world speed record, currently sitting at 763 mph.

This vehicle is designed to top 800 mph, but it needs to collect data while driving so the team can monitor and study how it performs. Wi-Fi is fast enough to handle the transmission of data and video, so the team will have to install some fancy Tropos systems to beam that data from the race area (a dry lake bed in Nevada) to the team’s base stations. The car is decked out with all kinds of sensors, from accelerometers to piezoelectric sensors to gyroscopes. Beaming Wi-Fi at those speeds, in real time, is no mean feat, but the team is already well on its way to breaking the speed record, with test runs topping 400 mph, so hopefully they can install it soon to properly monitor the tests.