In Which We Ponder the Trap of “Something for Nothing” Thinking

If you want the results, you still have to do the work 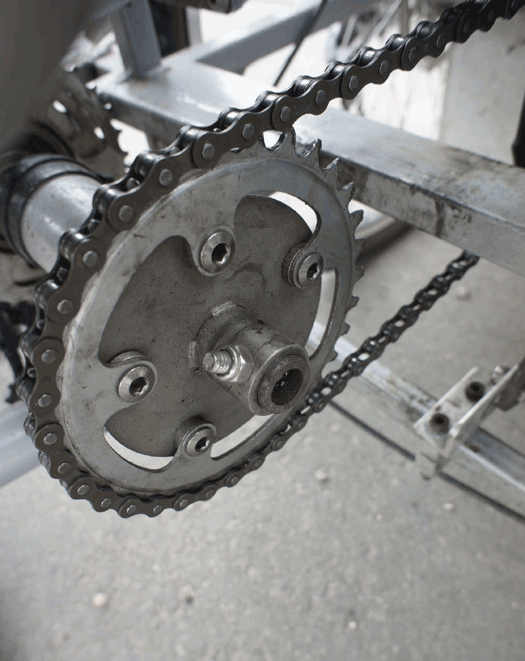 A close up of the chain found on the EcoTour's vehicle. The chain is used to help the motor, not recharge the battery. Pierce Hoover, taken with the Sony NEX-5
SHARE

There’s no denying that our unique vehicle draws a lot of attention. Drivers frequently slow as they pass to gawk or snap a photo; a stop inevitably draws onlookers with questions, comments and suggestions. One of the most common questions involves the drive system.

When I explain that it’s an electric assist vehicle, most people assume that the pedals are used to recharge the batteries. No, I explain, the pedals are used to help the motor. They drive the wheels, same as on a bicycle, and allow us to add human power when it is needed for faster accelerations, hill climbing or increasing range. This direct mechanical system provides the most efficient means of energy transfer, while introducing generators; chargers and so forth would result in a significant loss in efficiency as energy is converted from mechanical to electrical form, stored and released from the batteries, and routed through resistive wiring.

But even when I take the time to explain this thinking, most folks still favor the regenerative concept – or suggest adding a solar panel, or regenerative brakes, or maybe even a roof turbine to harvest wind energy. Eventually, I realized that this type of thinking had its roots in a concept that is hard to shake: the belief that through some clever tricks of technological, it’s possible to get something for nothing. Examples of this type of thinking can be found in TV infomercials. For example: a shovel is a simple machine that provides leverage to move dirt. But it still takes work. Every so often, someone will come up with some sort of spring-loaded, pulley driven digging tool that is touted as being able to do twice the work of a shovel for half the effort.

And sure, it might be possible to improve on the ergonomics of a shovel, therefore yielding some increase in the overall efficiency of the dirt moving process, but it still takes the same amount of energy to lift a pound of dirt three feet in the air. It’s called workload, and the principle is the same for our vehicle. We go farther and faster when the tires are properly inflated and the gears are oiled and meshing. Beyond that, it’s purely a matter of battery capacity, engine power, and how much human effort we want to add to the equation. Unless one or more of those is allowed to increase, there are no tricks of engineering or physics that could substantial boost performance. Though this fact may seem obvious to anyone with even a moderate understanding of mechanical science, I continue to see designers get caught up in the fantasy of something-for-nothing as they create new leading-edge designs.

There are some exciting and elegant ideas on the electric vehicle horizon, but if those concepts stand any chance of reaching the real world, their designers will need to temper their advanced ideals with a dose of common sense and simplicity. Sometimes, a chain really is the best solution.