Das auto can drive itself 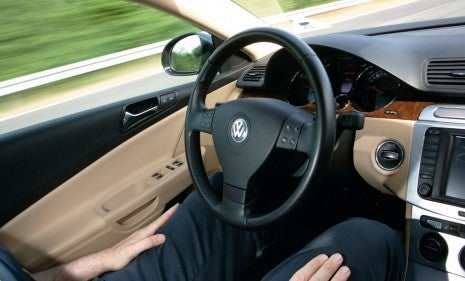 Drivers of Volkswagens could soon forget about fender benders or lane drifting on the Autobahn — their cars will take care of those little problems.

The German automaker debuted a new “Temporary Autopilot” (TAP) program that can control the car semi-automatically at speeds up to 80 mph. It combines existing driver-assist functions found in many cars nowadays, like adaptive cruise control and side monitoring for safer lane-changing, with a radar system, laser scanner and ultrasonic sensors.

When in TAP mode, the car maintains a safe distance from the vehicle ahead, checks the lane markers to keep the car in the center, and automatically slows down when approaching a bend in the road. The goal is to prevent accidents caused by inattentive drivers, according to Volkswagen. The driver still maintains control and can override the car’s actions at any point, however.

“What we have achieved today is an important milestone on the path towards accident-free car driving,” said Jürgen Leohold, head of Volkswagen Group Research, in a statement.

This is just the latest step in a growing trend of cars that can park themselves, drive themselves across continents and even climb mountains. Looks like the state of Nevada, the first to pass regulations governing driverless cars, is on the right track.