On the Unanticipated Effects of Curves

We’re five days into our cross-country road trip. The rolling hills of Virginia’s Piedmont are behind us, and we’re into... 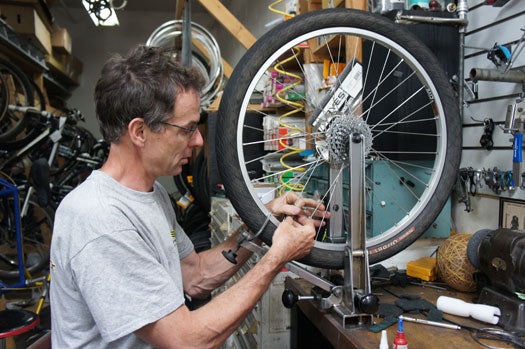 Five days into the EcoTour journey and well into hill country, the vehicle's back wheel gets some much needed tuning. Pierce Hoover, taken with the Sony NEX-5
SHARE

We’re five days into our cross-country road trip. The rolling hills of Virginia’s Piedmont are behind us, and we’re into the Appalachian mountains. Up to the 200 mile mark, we were averaging 25 watt-hours per mile – well below our 35 watt-hour target. Now, as we are addressing our first significant climbs, the per-mile wattage has increased, but not alarmingly when averaged over a two- or three-day period. The climbs can be real battery drainers, pushing the watt-hours per mile upward into the 40-plus range. But what comes up must eventually go down, and there have been subsequent downhill sections where we were able to coast for miles at a time. As a result, we are still holding at under 30 watt-hours per mile as we seesaw our way through hills and valleys.

Overall, the electric drive seems to be doing everything we’d expected. The wheels, on the other hand, have continued to present challenges. During our test runs in Florida, we’d operated the vehicle under load, and had even found a few short but relatively steep hills to test gearing and climbing ability. The vehicle’s rear wheels were built on sturdy mountain bike rims, and held up quite well through more than 400 miles of test rides. But there was one more factor that we failed to anticipate – one that did not come into play on the mild curves typical of Florida roads. Now, as we are moving into hill country, and coasting through some tight downhill curves after each climb, we are discovering an additional stressor created by the geometry of the vehicle.

A bicycle banks into a turn, allowing centripetal forces to align with the angled wheel. In contrast, our four-wheeled platform rides level through turns, and the forces of angular acceleration create significantly greater side loads on the wheels. These forces likely contributed to some broken spokes early on, and required two stops at bike shops for wheel tuning. We are now paying closer attention to the wheels, and are checking and tensioning spokes several times each day. Ultimately we may have to go to a heavier wheel similar to those used on tandem bikes or taxi rickshaws. Till then, however, we’ll just keep rolling and deal with issues one mile at a time.