The idea of a robot assuming control of your car takes some getting used to. But the race to build... 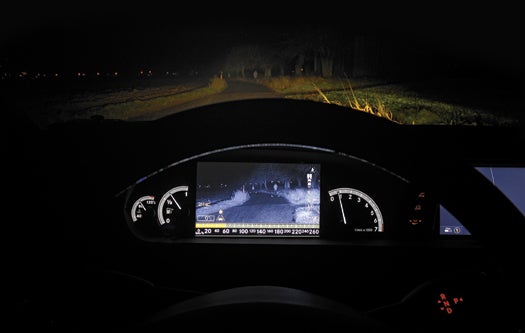 The idea of a robot assuming control of your car takes some getting used to. But the race to build increasingly autonomous automotive safety systems is well under way, as the cost of cameras and sensors drops and engineers get better at programming those tools to work together.

A big advance arrives this fall with the 2012 Mercedes-Benz CL-class. Its Spotlight safety system will link night-vision cameras with video-driven adaptive high beams to find people in the car’s path and warn both driver and pedestrian. An onboard computer continuously scans images captured by the car’s windshield mounted night-vision camera, looking for human shapes. If it finds one, the headlights point at the person and flash. Joerg Breuer, the manager for Active Safety Systems at Mercedes, says Spotlight detects pedestrians 1.3 seconds earlier than a driver can.

Laser scanners will make sensor-driven safety systems more accurate still. Take BMW’s Left Turn Assist, which the company revealed earlier this year but hasn’t yet slated for production. Left Turn Assist uses a trio of laser scanners, along with a lane-detecting video camera and GPS, to make left turns—statistically one of the most dangerous maneuvers on the road—safer. When a computer senses that the driver is about to take a left, lasers scan a 200-degree field for hazards. If the system detects an imminent threat, and the car is moving slower than 6 mph, it will brake automatically. At higher speeds, it triggers audio and visual alarms. Laser scanners are still prohibitively expensive, says Dirk Wisselman, BMW’s head of Advanced Safety Systems, but the cost is falling quickly.

Wisselman sees Left Turn Assist as only a first step. The real change, he says, will come from car-to-car communication, in which vehicles can detect one another and share information about speed and trajectory. “This has tremendous implications for safety,” Wisselman says. “And I think we’ll see it in the next decade.”