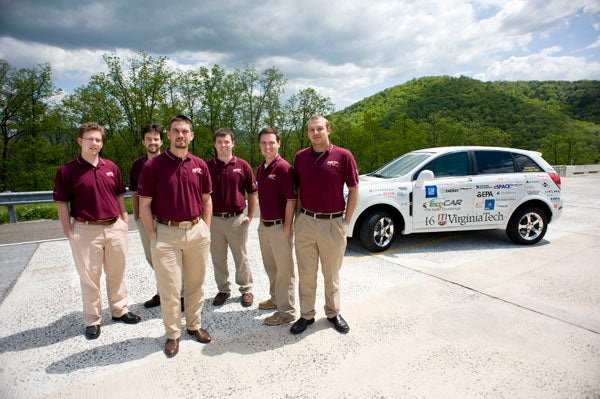 As a result of some mechanical problems, Pierce and Nash were able to meet with the Virginia Tech engineering team in Blacksburg, Virginia. Courtesy of Virginia Tech, College of Engineering
SHARE

As with most prototype vehicles, we’ve had our share of design and mechanical problems. Fortunately, these challenges have–so far–not stopped us, but have slowed our progress, putting us three days behind our original projected schedule. Of course, as Dwight Eisenhower famously said, planning is everything, but plans are nothing.

With new gearing and a new set of rear wheels, we’re beginning to attack the big climbs along the Virginia/Kentucky border. Several roads will have uphill grades of 9 to 11 percent, providing a real test of the drive train’s capabilities. My only real regret is that last week’s delays bought us to Blacksburg, Virginia three days behind schedule. As a result, we were unable to meet with the Virginia Tech engineering team, which is working on a project known as VTREX–a hybrid SUV created for the EcoCar Challenge.

Now in its third year, the Challenge will bring together 16 university teams determined to create consumer-ready vehicles at the cutting edge of fuel efficiency and emissions reduction. Among the entries are pure electric, extended-range electric, hybrid plug-in and fuel cell vehicles, all of which must meet current highway safety standards. The Virginia Tech team’s VTREX is based on a GM-made crossover SUV platform, and has the ability to drive at highway speeds for distances of to 50 miles as a pure electric vehicle, then transition to E85 ethanol for longer trips.

At just over 500 miles into our cross-country trip, I am confident that we can make it to Oregon. But I am equally certain that few people would wish to trade in the convenience of their current car or truck for something as minimalist as our ride. The U.S. is a car culture, and will likely remain so for many years to come. But the future is not ultra light 1,500 mpg buggies like our vehicle, but rather the more conventional cars like the VTREX that can double or even triple current fuel efficiencies without compromising the safety or creature comforts that we Americans have come to expect.