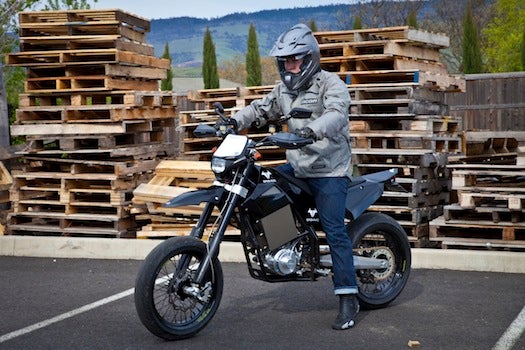 When they go on-sale at some point in the next year or so, the Brammo Engage and Encite dirt bikes will be the first production electric motorcycles ever fitted with a gearbox. The six-speed unit, mated to the electric motor and sitting beneath the battery packs, works just like it does on gas-powered counterparts — pull in the clutch with your left hand, click down into first with your left foot, feed the clutch out and you’ll pull away. Just here, you’ll do that silently.

By working to maximize an engine’s leverage over its wheels to increase acceleration or reduce the speed at which the engine needs to spin to boost efficiency, gearboxes have enabled gas-powered vehicles to be both faster and more efficient. Those are advantages single-speed electric vehicles haven’t yet enjoyed. Conventional wisdom stated they didn’t need to; the large torque outputs and flat power delivery of electric motors enabled reasonable performance without multiple speeds.

So what’s the advantage? Craig Bramscher, Brammo’s CEO, chiefly sings the praises of increased performance. “I’m afraid to give it full throttle, even in 3rd gear,” he says of the smaller of these two bikes, the Encite minimoto.

The Engage and Encite, which haven’t had performance figures released yet, will be able to take advantage of same ability to choose increased leverage or lower motor speeds, meaning that the huge torque of electric motors will be multiplied in lower gears.

The clutch lever will also eliminate a traditional electric bugbear — poor throttle control. On bikes without that clutch, electric manufacturers have only had throttle response tuning to work with to make their bikes both smooth and responsive, two properties that are mutually exclusive. Off-the-line acceleration was also blunted by the need to delivery safe, predictable acceleration, as we found in our test drive of the older Brammo Enertia, instead of wheelies or wheelspin. By giving riders the ability to control motor response with the clutch, Brammo should be free to program much more aggressive throttle response. Of course, riders will also be free to use that clutch to lift the front wheel off the ground, thus impressing onlookers with both their environmentalist bonafides and general badassery.

Four iterations of the two bikes you see here are planned, including road-legal and race-only supermotos, a motocross bike, and the mini dirt bike. Prices will run from $9,950 up to $11,995.

Brammo is being a bit ballsy with the introduction of these bikes. The motorcycles you see here are engineering prototypes without final styling or even drivetrain packaging and haven’t yet operated in a competition environment, yet they’ll debut this Friday at the MiniMotoSX race in Las Vegas, going head-to-head with single-speed electric competitors like the Zero MX and Quantya Track. We’ll find out then if gearboxes are really an electric motorcycle game changer.