Google’s self-driving cars aren’t even close to being commercially available, but that doesn’t mean the company isn’t paving the way... 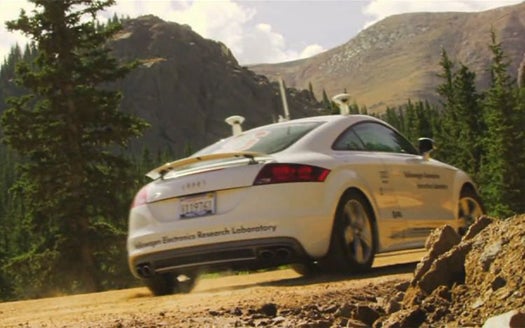 Stanford University has a long tradition of building autonomously navigated cars, like this Audi TT-S designed to race the famous Pikes Peak Hill Climb. Now, researchers from Stanford and Carnegie Mellon University – itself no stranger to building autonomous vehicles – have teamed with Google to build a fleet of robotic vehicles that negotiate traffic without human intervention.
SHARE

Google’s self-driving cars aren’t even close to being commercially available, but that doesn’t mean the company isn’t paving the way for their eventual rollout. Google is lobbying for legislation in Nevada that would make that state the first in which their cars could legally be driven on public roads, the NYT reports.

The proposed legislation is actually split between two bills. One is an electric vehicle bill to which Google is trying to attach an amendment allowing for the licensing and testing of autonomous autos. The other–less important for the vehicles themselves but likely more important to some potential future passengers–is an exemption to the existing law that prohibits texting while in the driver’s seat.

Google’s cars have already been logging dubiously legal test miles in California, where it was revealed last year that the company had road-tested robotic vehicles on more than 140,000 miles worth of asphalt, including iconic Highway 1. Of those, more than 1,000 miles were driven completely autonomously, and it’s safe to assume Google’s six autonomous Prius’s and one Audi TT have logged more miles since that October announcement.

But why Nevada and not California? And why now? Google execs aren’t saying and your guess is as good as ours. But if the driverless car is the future of automobiles it’s not a bad idea to start the legislative process now. Before autonomous vehicles become a commercial option, rigorous licensing standards, safety reviewing processes, and performance testing standards all have to be put into place, and all that has to happen somewhere first.