After 188 days (80 of which were spent driving), four continents, and one defeated team, the Zero Emissions Race–world tour... 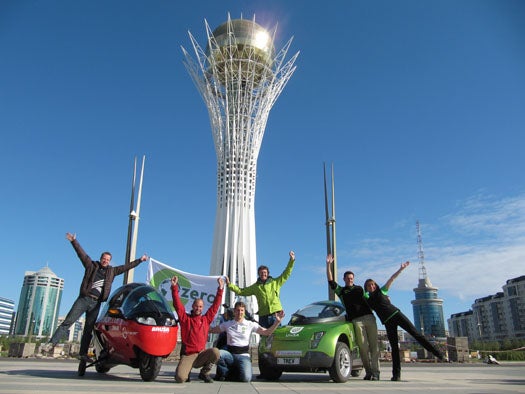 After 188 days (80 of which were spent driving), four continents, and one defeated team, the Zero Emissions Race–world tour of renewably-powered electric cars–is finally over, with the three remaining teams having pulled into Geneva this morning.

The race took the four teams, one each from Australia, South Korea, Germany, and Switzerland, from the start in Geneva through Europe, Asia, an ocean hop to Vancouver and down the west coast of Canada, the U.S., and Mexico, through Mexico and across the Atlantic to Morocco, then up through western Europe and back to Geneva. While the South Korean entry conked out due to mechanical issues early in the first European leg, the other three teams completed the entire journey.

The cars are all electric, and all slightly unusual–no Priuses here–including a motorcycle, a three-wheeled bubble-looking car, and a three-wheeled covered motorcycle. The rules stipulated that the vehicles all had to carry at least two people (usually in tandem, rather than side-by-side), have a range of at least 250km (about 155 miles), and be powered by renewable electricity fed into the grid by a plant in the team’s home country. That power came either from solar or wind farms, which produced at least enough energy to propel the cars through their nearly 17,000-mile trip.

Due to the limitations of the cars, mostly in energy storage, the Zero Emissions Race wasn’t exactly a race, in the sense the teams weren’t really competing with each other. The short range of the cars, plus the long charge times (each car would stop for a four-hour lunch-and-charge break every day) kind of takes the competitiveness out of the event. (Though that didn’t stop the Swiss press from declaring “Swiss car wins zero-emissions race!”)

Finding power sources seems to have been a slight obstacle for the drivers–“They were wiring straight into the power supply in certain situations because it was the only way to get a reliable power source — it was a challenge,” says Alexandra James, member of the Australia team. (Evidently they didn’t pack a military-grade power-line bathook.) But after more than six months on the road, they still proved that zero-emissions cars may have a future even for long-distance driving–though we may have to rethink what a car can be.