The crossover SUV has reached a crossroads. Models like the Toyota RAV4 and Honda CR-V have grown so large and... 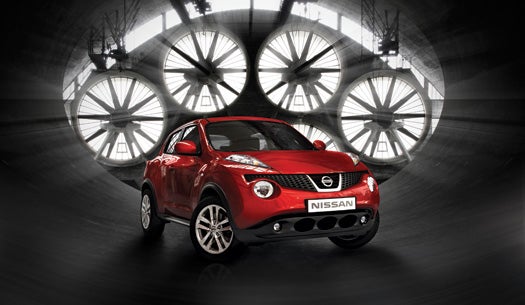 The crossover SUV has reached a crossroads. Models like the Toyota RAV4 and Honda CR-V have grown so large and homogenized that they’ve become the new family SUV. Bite-sized boxes such as the Scions, Kia Souls and Nissan Cubes have plenty of attitude, but they’ve never been sporty enough to be taken seriously. That’s what’s so refreshing about the Nissan Juke: it pushes the evolution of the crossover into something beyond the shrunken SUV—more like a unexpectedly sporty, cityfriendly super-hatchback in which every component represents the latest trickle-down of advanced technology into affordable vehicles.

At the core is Nissan’s new 1.6-liter DIG (Direct Injection Gasoline) engine. a turbocharger combines with direct injection to wring 188 horsepower and 177 pound-feet of torque out of the little four-cylinder. As a result, the Juke can churn from 0 to 60 mph in about seven seconds. It can also get 27/32 mpg. Nissan’s continuously variable transmission contributes to that efficiency by using a beltand-pulley system to access a continuous band of gear ratios so that the engine can run at the most efficient speed at all times. Optional all-wheel drive comes with a torque-vectoring system like those usually found on pricey sports cars. Sensors measure wheel speed, steering angle, yaw rate and gear position, and a central computer independently adjusts the amount of torque applied to each rear wheel, keeping the car stable during quick turns and highway merges and on slick uphills.

Inside, in addition to the standard gadget array (Bluetooth, optional backup camera), Nissan’s digital I-CON (integrated Control) system switches between climate controls and a series of preset drive modes at the press of a button. and in a final flourish, an in-dash G-force meter measures acceleration forces, just for kicks.