The company chose CES, not next week’s Detroit Auto Show, to pull the cloth off its first all-electric offering 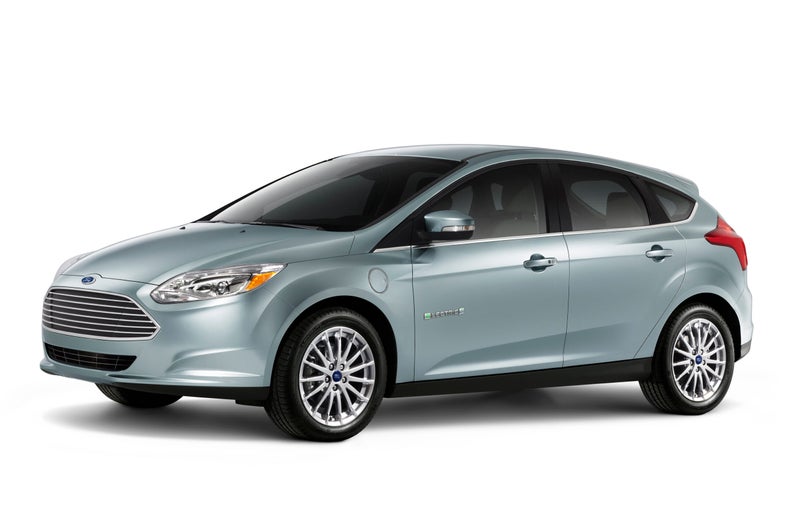 We’ve heard it said that electric cars make driving like using an iPhone app. It’s not true, but Ford’s choice of venue for the reveal of the Ford Focus Electric—the Consumer Electronics Show—probably won’t help change that perception.

The Ford Focus EV is part of Ford’s overall electrification scheme, which involves rolling out five distinct electrified models (ranging from the purely electric Focus EV to an plug-in hybrid whose details have not yet been officially announced) by 2013. The Focus Electric, which is schedule to enter 19 markets by the end of this year, is a five-door hatchback powered by a 23 kilowatt-hour, liquid-cooled lithium-ion battery. As with the Chevy Volt, the battery supplier is LG Chem. The Focus Electric will have a top speed of 84 mph and should reach a driving range comparable to that of its closest competitor, the Nissan Leaf, which gets approximately 100 miles on a charge. We don’t yet know how much the car costs, whether it will be leased, sold, or both, or how many cars Ford plans to make. We do know that it will be built at Ford’s Michigan Assembly Plant, on the same production line as gas-powered Focuses—an arrangement that Ford says will allow it to adjust production volume to demand.

We’ve known about the Focus EV for quite a while, and in fact Ford has been giving journalists short test drives in hacked-up demo models for at least a year. Today’s two real pieces of news involve the charging time and the mobile smartphone control system.

First, the charging: Because the Focus Electric uses a 6.6kW onboard charger, it will be able to charge in about half the time of the Nissan Leaf—in three to four hours from a 240-volt docking station. (By contrast, the Leaf uses a 3.3 kW charger; we suspect Ford can get away with the faster charging because their battery, unlike Nissans, is liquid-cooled, so that the battery temperature can be carefully controlled during charging.)

Next, MyFord Touch mobile. This smart phone app will let you check the car’s state of charge, program its charging time, heat or cool the cabin remotely, find the car using GPS, and control various other functions. (The Chevy Volt and the Nissan Leaf can both be controlled using similar apps.)