Cousin Of The Chainsaw Engine Could Power 100-MPG Car

Carmakers have always struggled with the problem of inefficiency. Internal combustion engines quickly convert the chemical energy in fuel into... 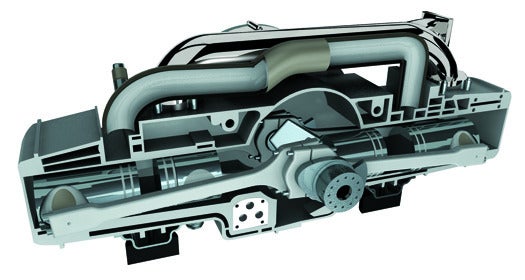 Carmakers have always struggled with the problem of inefficiency. Internal combustion engines quickly convert the chemical energy in fuel into the kinetic energy that moves cars forward, but even the engine in the Toyota Prius, among the most efficient ever built, uses only 37 percent of that chemical energy — the rest goes to creating unwanted heat and friction. So carmakers paid attention in July when Bill Gates and fellow billionaire Vinod Khosla announced that they were investing $23 million in EcoMotors, a Michigan company that has promised to produce an engine that would convert far more of its fuel energy into useful work, and in doing so crack 100 mpg.

The engine is called OPOC, short for opposed-piston, opposed cylinder. Inside each of the OPOC’s two cylinders, two pistons slide in opposite directions. EcoMotors says this design, which uses half the parts of a normal internal combustion engine, allows the OPOC engine to achieve up to 20 percent greater mileage than the current most advanced gas or diesel engines. In its key operating range, a diesel OPOC could convert as much as 48 percent of its fuel’s energy into work, beating today’s best diesels. Moreover, an OPOC engine is just half the size and weight of a comparably powered conventional engine, which reduces the burden of moving its own mass.

The OPOC gains much of its power density from a two-stroke engine cycle, which produces power every time the crankshaft completes one revolution (compared with two go-rounds for the four-stroke engines found in most cars). The problem with two-strokes is pollution. The cruder combustion cycle tends to leave behind unburned fuel (and oil, which in many two-strokes is mixed with the fuel) that gets spewed out with the exhaust. But John Coletti, the president of EcoMotors and a former Ford executive, says OPOC avoids the emissions problem by using sophisticated engine controls and electric-assisted turbochargers, which cycle air through the combustion chamber 30 percent more efficiently than a normal two-stroke, burning fuel more completely and making the OPOC as clean as a four-stroke engine.

EcoMotors is developing engines that combine two OPOC “modules”—the two-cylinder, four-piston machine shown here. Under light loads, one module would shut down for a 30 percent boost in mileage. Former GM chief engineer and EcoMotors co-founder Don Runkle says that next year the company will publicly demonstrate a 300-horsepower OPOC diesel, but not necessarily in a car. Automakers aren’t the only potential customers: Earlier this year, Eurocopter unveiled a concept helicopter powered by two OPOCs.