Just ahead of the Paris Motor Show, BMW has unveiled its new electric scooter prototype, the Mini Scooter E, which... 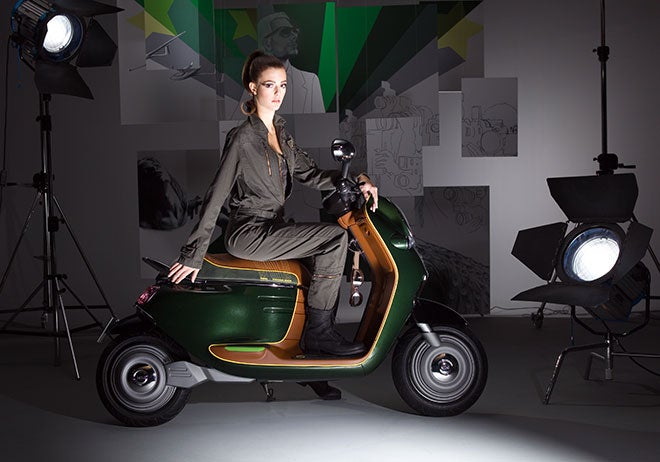 One of three new Mini Scooter E designs unveiled during London's Fashion Week. BMW will showcase the electric scooter prototypes at the Paris Motor Show next month. via Wired
SHARE

Just ahead of the Paris Motor Show, BMW has unveiled its new electric scooter prototype, the Mini Scooter E, which plugs in to a standard household electrical outlet and uses a smartphone for a key.

BMW unveiled the Mini scooter during London’s Fashion Week, leaving no doubt about their targeted trendy audience. As Autopia points out, the automaker brags that its scooter is “spontaneous, flexible and CO2-free.”

The scooter comes in three styles: A two-seater with the same color scheme as the Mini-E electric car; “Mod,” a nod to British 1960s pop culture; and a single-seater “purist” model. There are no concrete plans to actually build and sell them yet, however.

The scooter has some pretty cool features, including a snap-on adapter for your smartphone, which serves as your ignition key. The smartphone then becomes the scooter’s display and control mechanism.

Mini even plans to offer a smartphone app that can tell you when other Mini Scooter Es are in the vicinity, and the scooter will automatically flash its headlight in a self-righteous greeting.

So far, the best feature seems to be the on-board power cord, which you can plug into an electrical outlet anywhere in your hipster pad. No worrying about the lack of electric vehicle charging stations.

Smart will also unveil an electric scooter at the Paris show, which runs Oct. 2 -17. Their concept is expected to have an airbag, according to CNET.