The Technology That Drives the World’s Fastest Electric Bike 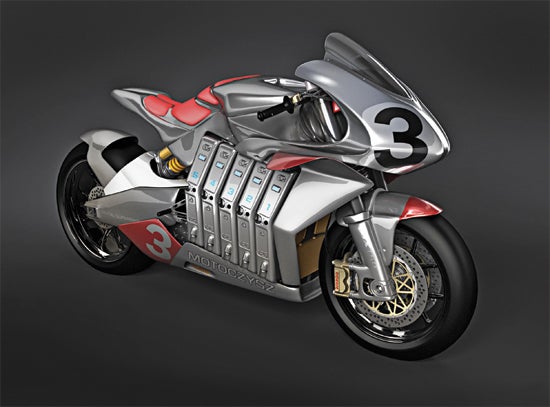 By winning June’s 37.7-mile Isle of Man TT Zero—the electric-vehicle class of the world’s toughest motorcycle race—and setting an average speed record of 96 mph, the 2010 MotoCzysz E1pc officially became the fastest electric bike yet. Built by Portland, Oregon–based designer and engineer Michael Czysz, the E1pc has 10 times the battery capacity of a Toyota Prius and 2.5 times the torque of a Ducati 1198. Czysz wants the E1pc to be a testbed for technologies, such as oil-cooled motors and swappable batteries, that could make it into electric cars. He says he’s talking to several companies about licensing or co-developing technologies and that he’s working on a joint-development project with the Indian auto giant Bajaj. 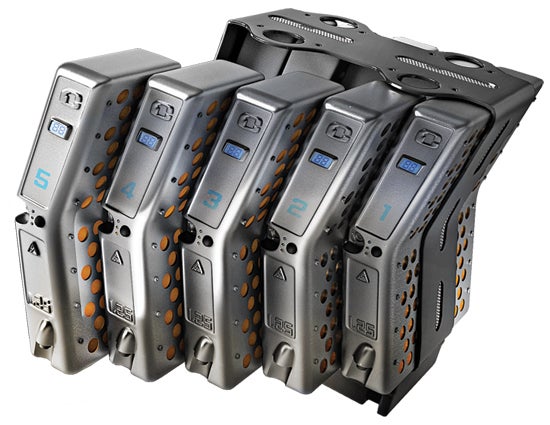 A wireless carriage lets battery modules be changed on the fly.

Hot-Swap Batteries
Storing 12.5 kilowatt-hours of electricity (compare that with the Chevrolet Volt’s 16), the E1pc’s batteries can and have turned an errant wrench to molten metal. So Czysz had to design a wireless carriage that allows the individual battery modules to be swapped out in seconds while making the bike safe to work on.

Advanced Aerodynamics
On straightaways, the rider scoots back onto a secondary seat and flattens his back to minimize wind resistance. Small winglets direct air into ducts on the frame, reducing aerodynamic drag.

Oil-Cooled Motor
The oil-cooling system that MotoCzysz has installed on the E1pc’s electric motor allows it to create peak torque longer than more-common air-cooled motors, most of which overheat after a few seconds at peak power. In the E1pc’s case, peak power is 250 pound-feet of torque.

Direct Drive
On the E1pc, there’s no transmission, just a fixed gear. The result isn’t quite 1 percent throttle to 1 percent torque, but it’s close—and this on a bike that hit 141 mph during the Isle of Man race using only 40 percent of that throttle. When decelerating, the motor applies resistance to the gear, providing regenerative braking.