Designed by Thomas Heatherton, who brought you the Seed Cathedral 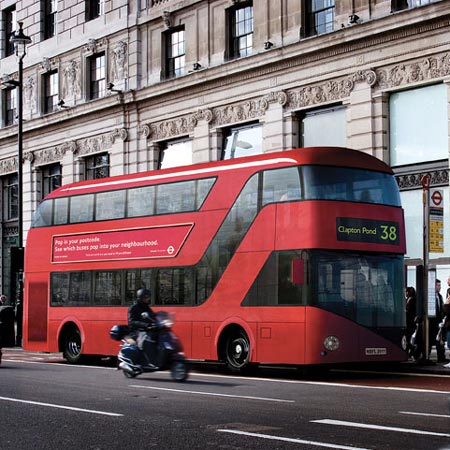 Good news for the nostalgic: London’s signature red Routemaster buses are making a stylish comeback. The mayor of London, Boris Johnson, and Transport for London today unveiled the final design for new double-decker buses inspired by the Routemaster, which was phased out in 2005.

British designer Thomas Heatherwick, of Seed Cathedral fame, designed the bus, which will be manufactured by the Wright Group. The new Routemaster is scheduled to debut on the streets in time for the Olympics in 2012.

Johnson initially announced the new buses as part of a design contest in 2008. Although a different concept bus by Foster and Partners, in collaboration with Aston Martin, was announced as the winner in December 2008, the mayor has now settled on Heatherwick’s bus as his vehicle of choice.

Like the old Routemaster, this bus will have an open platform in the back so that passengers can easily hop on and off. Two staircases on the inside will facilitate smooth passage between decks. As for the fun factor, a swooping glass window in the back follows the curve of the staircase to provide a view of the city. Unlike its predecessor, however, this lightweight bus will cruise along more quietly than other vehicles.

You can watch Heatherwick Studio’s design process in the video below:

Engineers will finish a mockup of the bus prior to building the first prototype at the end of this year.