Advanced electric drive, autonomous navigation and other technological advances will revolutionize the way we drive. PopSci presents stunning visions for the future of the automobile 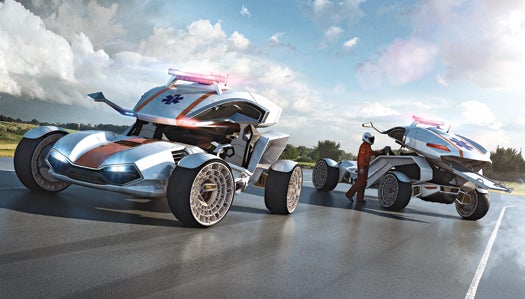 In this month’s Future of the Car issue, we’ve envisioned three ambitious concepts for vehicles of the future, based on insights and other concepts from some of the brightest automotive designers and engineers in the industry. You can see the others here.

“Modular mission” flexibility—the ability to rapidly revamp for a new task by simply swapping out gear—is already in the cards for future Navy warships. The same idea is at work in this all-purpose rescue vehicle, which is inspired by the Rescue X concept created for Ford by the German designer Robert Engelmann.

Plug-and-Play Rescue Equipment
Between missions, job-specific pods filled with equipment for firefighting, emergency medical care or hazmat duties can be quickly attached to the chassis. The vehicle’s diesel engine can also work as a 30-kilowatt generator for powering rescue equipment.

Indestructible Tires
Similar to today’s Michelin Tweel airless tires, these use honeycomb-shaped polyurethane spokes to absorb shock and withstand gouging rocks and broken glass without getting a flat.

Autonomous Drive
Onboard sensors and a GPS unit guide the vehicle to its destination by the most efficient route with no input from a driver, leaving personnel free to provide emergency medical care.

Diesel-Electric Powertrain
As with prototype powertrains being developed for the military, a diesel engine powers electric motors, which then turn the axles. This gets rid of heavy drivetrain components while increasing power.

Advanced Off-Road Suspension
A beefed-up version of today’s Bose suspension system, which uses electromagnetic motors in place of shocks and springs, makes off-pavement rescues easy while at the same time improving handling and making the ride smoother for both emergency responders and patients.