The Best of the 2010 Detroit Auto Show

The 2010 North American International Auto Show in Detroit was quieter, smaller and shorter than in years’ past. But it was not, however, depressing, and considering the smoldering wreckage that is the automotive industry, that’s quite an accomplishment.

At last year’s show, it was far from certain that Detroit’s Big Three would still exist in early 2010; they’re still with us. Ford and GM are building impressive new cars. Chrysler, which essentially had nothing but repainted versions of existing models on display, is another story. And this year it became obvious that the growing call to electrification won’t fade away anytime soon; nearly every automaker has now announced plans (some credible, some less so) for the launch of hybrid or pure-electric vehicles in the coming years. Altogether, the show gave the impression of a shaken industry thrilled for the chance at a fresh start.

See the gallery for a look at the highlights 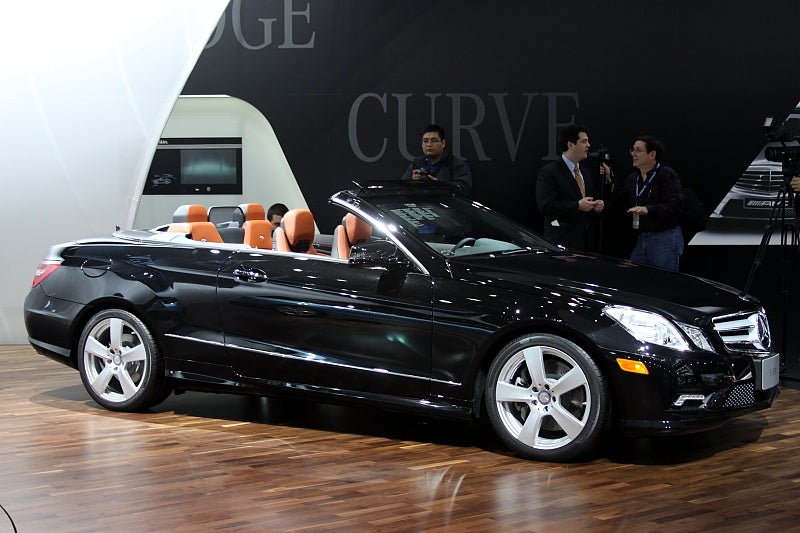 For the world premiere of the convertible version of the Mercedes E-class, it was 20-something degrees and snowy outside. Did I mention that we were in downtown Detroit? This car made us daydream about road-tripping in June, but Mercedes made a point of emphasizing the that the new E-class was a car for “four seasons, four people.” Four people is simple: There’s surprisingly generous seating for four. “Four seasons” refers to clever tech trickery designed to make the E cabriolet more comfortable than the standard topless car: AIRCAP, a wind deflector that pops off the top of the windshield to deflect air around backseat passengers, and AIRSCARF, a system that blows hot air from the front-seat headrests, warming you like “an invisible scarf.” 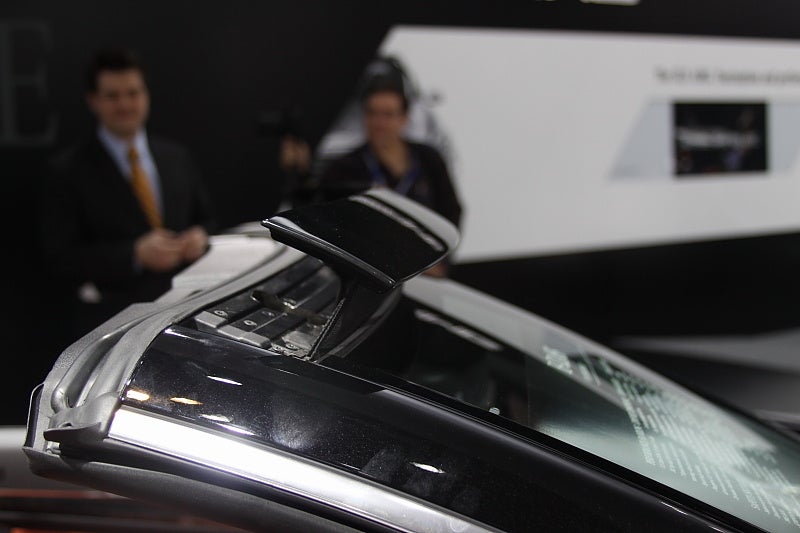 A close-up of the AIRCAP wind deflector. We look forward to trying this out in the summer. But we don’t think there’s any chance it could handle Detroit in January. 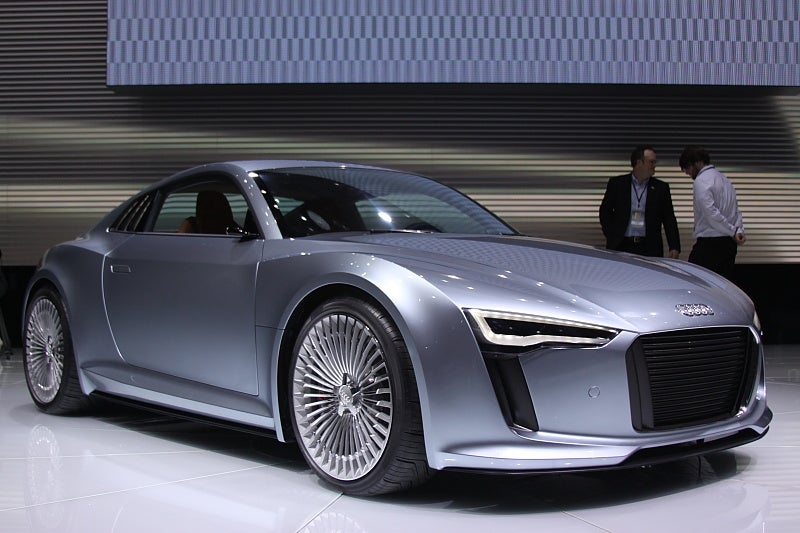 Another e-Tron! Audi has a schizophrenic relationship with electric cars: Audi USA president Johan de Nysschen is now famous for his remark that the Chevy Volt is a car “for idiots,” but the company keeps coming out with the sexiest electric-car concepts of any carmaker on the planet. This is a shortened version of the tangerine-colored e-Tron we saw at the LA Auto Show. It’s powered by a lithium-ion battery pack cable of storing 45 kilowatt-hours of energy, giving it a range of up to 155 miles, and as you would expect, it’s fast, running from 0 to 60 in less than six seconds. 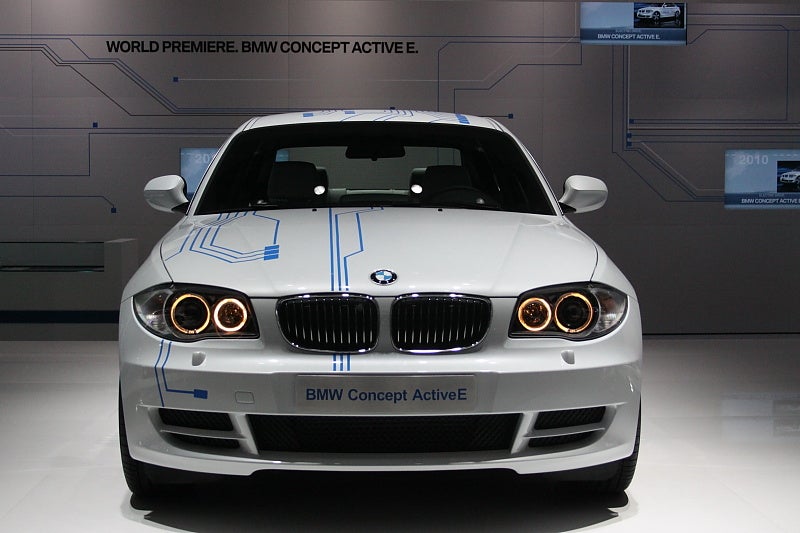 Last year, the BMW group released a test fleet of some 600 battery-electric Mini Es (see our test drive of one here). Next year BMW launch its second electric-car experiment, the ActiveE concept, which is essentially an electrified 1-series (though BMW points out that the ActiveE is far more purpose-built for battery-electric duty than was the Mini E, which was purely a conversion–a Mini Cooper with a backseat full of batteries). Running on lithium-ion cells, the ActiveE will seat four and run 100 miles on a charge. It’ll go into test fleets next year, marking another step toward the eventual mid-decade release of BMW’s high-end all-electric urban commuter, the “Mega City Vehicle.” 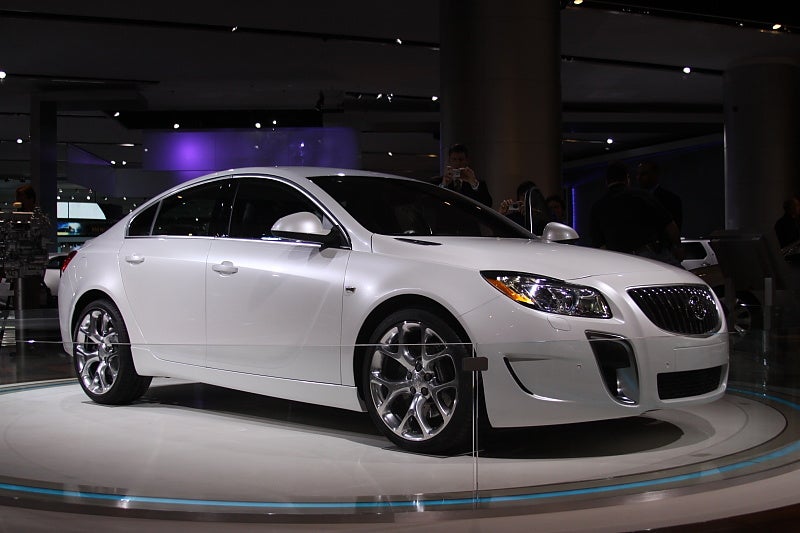 This powerful, high-end show car, a variant on the current Buick Regal, is part of GM’s bid to forever shed Buick’s image as a producer of shoddy, boring grandpa-mobiles. Based on the Opel Insignia, it’s powered by a 255-hp turbocharged 4-cylinder engine and equipped with all-wheel drive. 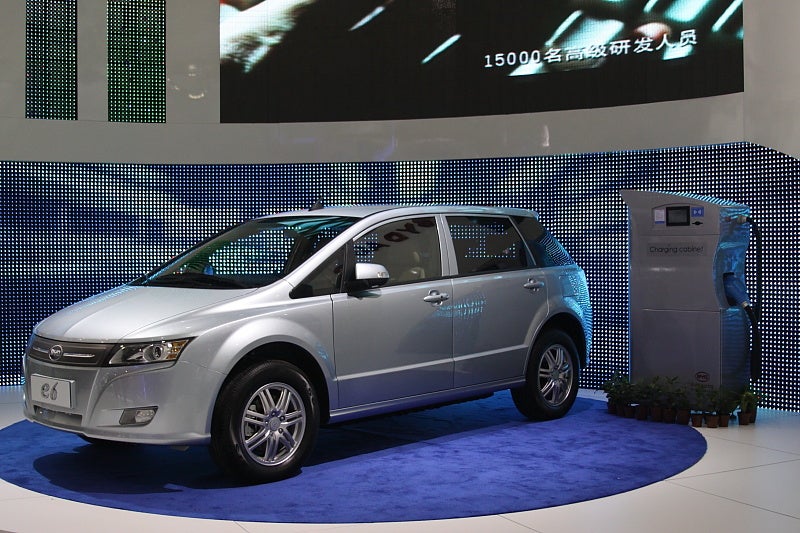 This is the BYD e6, the all-electric crossover that is scheduled to come to America from China later this year. BYD is a complicated subject; the company’s either the sleeping giant of the automotive world or a hopelessly overhyped player with little chance to break into the American market in any big way. The Shenzhen-based producer is young but already massive; depending on the ranking, BYD is either the fourth or fifth largest manufacturer of lithium-ion batteries for consumer electronics in the world. Last year BYD received major press after Warren Buffet made a $232 million investment in the company. But compared to the ridiculous level of expensive, stage-managed glitz on display elsewhere in the hall, BYD is still very rough around the edges, seemingly unaccustomed to the level of polish that the American market demands. But could BYD simply be where Toyota and Nissan were in the earliest days of breaking into the American market? Could they be another Hyundai? They’ve got money, labor, and the support of the Chinese government. We’ll be watching them closely in the months and years ahead. 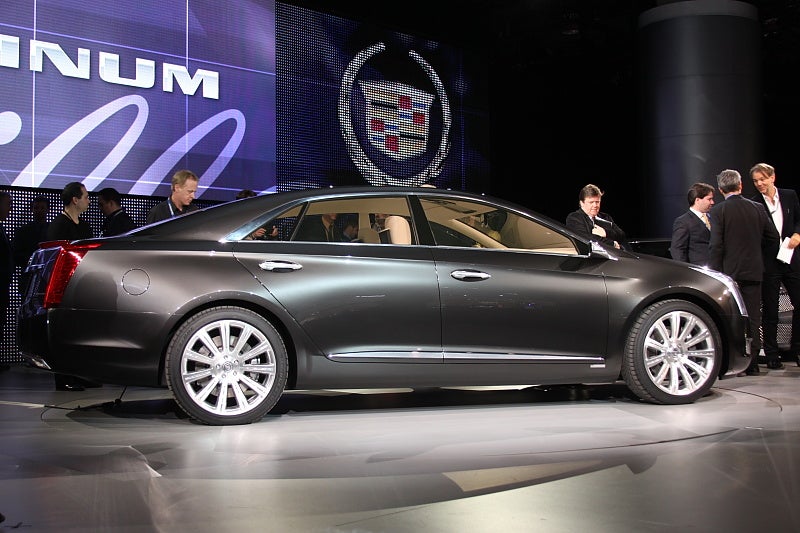 This ultra-luxe concept, designed for chauffeuring the executives of the future, is a strong hint about what to expect when Cadillac gets around to redoing its DTS and STS models. Powered by a plug-in hybrid drivetrain, the interior is plush and techno-tastic, with OLED display panels and plenty of other high-end toys that may or may not make it into a production version. 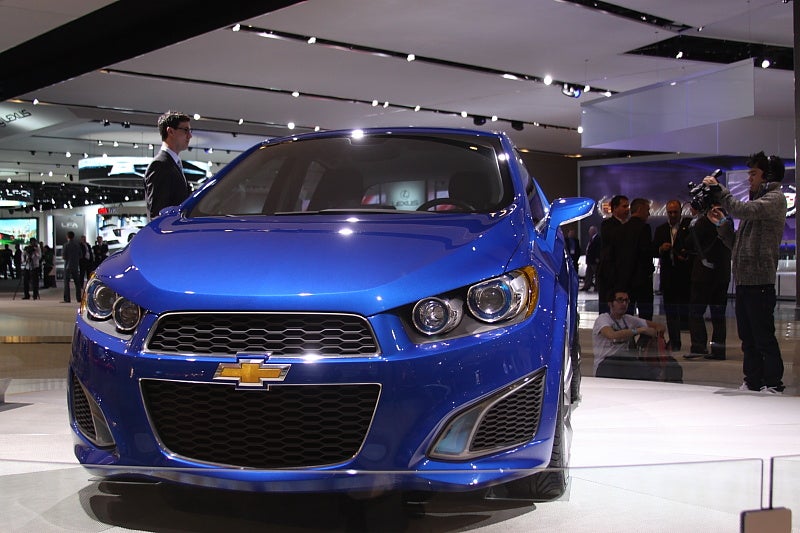 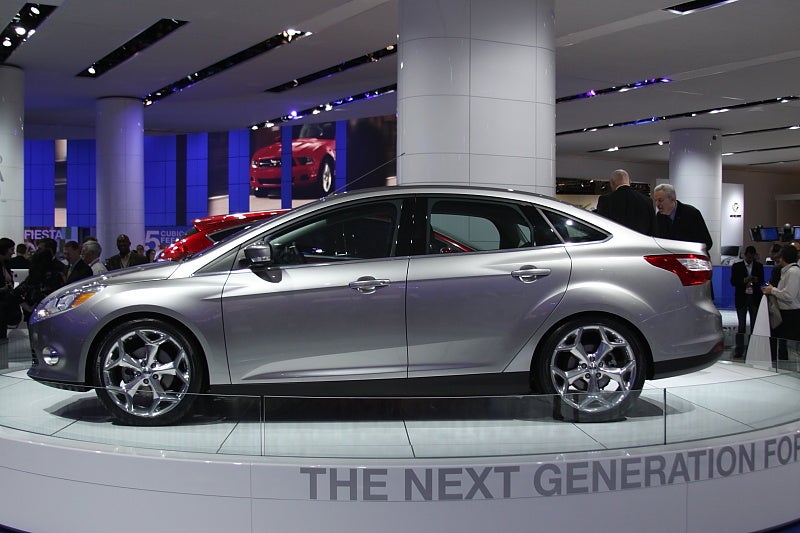 The star of the show, the Ford Focus. Really. I know that sounds strange, but this was Ford’s show (the company won both North American Car and Truck of the year with the Ford Fusion Hybrid and Ford Transit Connect, respectively), and the new Focus—which was unveiled the first morning in a roaring, rumbling light show that made it look as if the Focus was being beamed in via wormhole from a strange, distant star—was the talk of press day. It’s a global C-car, meaning it’ll be sold in mostly identical form around the world in volumes of 2 million cars a year by 2012. In North America, it’ll come in two flavors: The four-door sedan you see here and a five-door hatchback. If this car is as dialed in and fun to drive as the smaller Ford Fiesta, we expect it to be a hit. 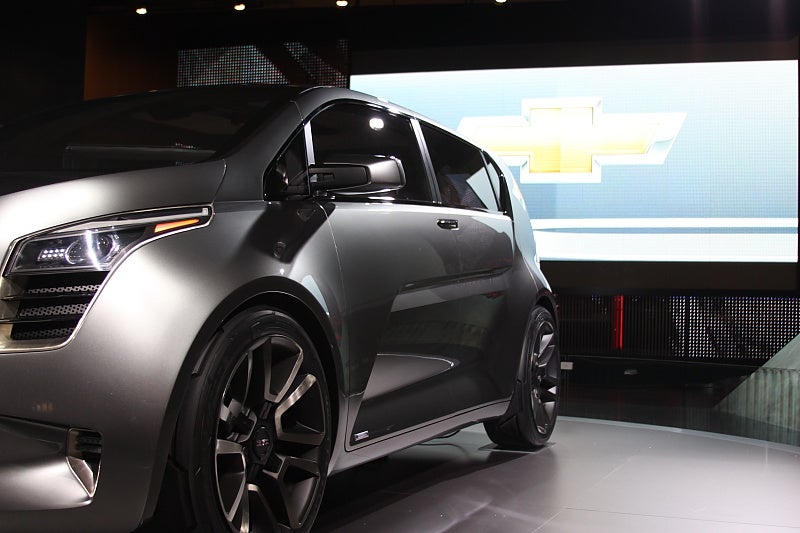 A study in making the GMC brand urban and fashionable, this concept crossover is, in the words of GMC exec Dave Lyon, “the automotive equivalent of an urban loft apartment.” 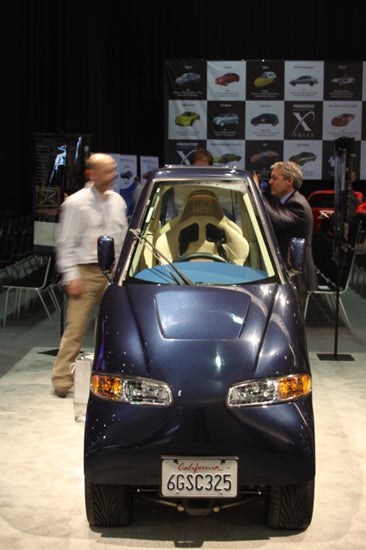 No, the aspect ratio of this image isn’t stretched. One of the true oddities of the show was this, the Tango, from Commuter Cars in Spokane, Washington. Currently on sale world-wide as a kit car that is delivered within six months of order (and which requires eight hours of assembly once it gets to your door), this bizarrely narrow two-seater actually weighs 3,150 pounds, most of that in lead-acid batteries mounted under the floor. Billed as “the world’s fastest urban car,” Commuter Cars says this thing can run from 0 to 60 in approximately four seconds. 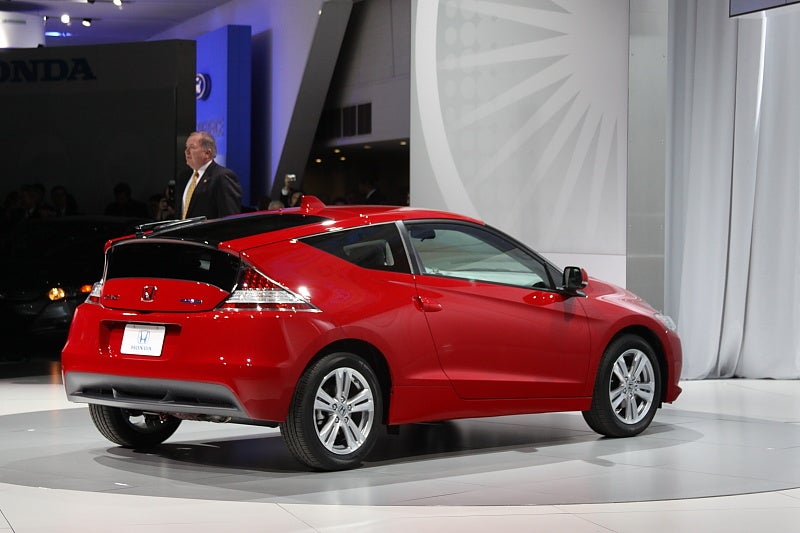 We’ve long had a sweet spot for the original CR-X, on which the CR-Z is based, and when this first rolled out on stage we were excited. But it turns out that this dedicated hybrid is slapped with a 37 mpg combined fuel-economy rating with the automatic transmission, falling to 33 mpg with the manual transmission. What? These numbers are preliminary, but when the third-generation Prius is getting 50 mpg, mileage this low for a hybrid seems like a missed opportunity. 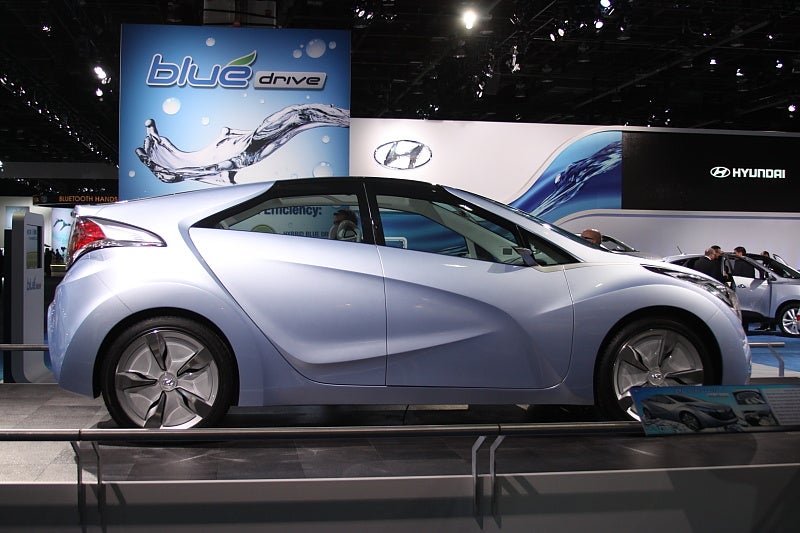 This concept is Hyundai’s “test bed of new ideas”—drive-by-wire steering, solar charging, a plug-in hybrid drivetrain that uses lithium-ion batteries (the same batteries that will go into the 2011 Hyundai Sonata), and, interestingly, a system that turns heat from exhaust gases into electricity. 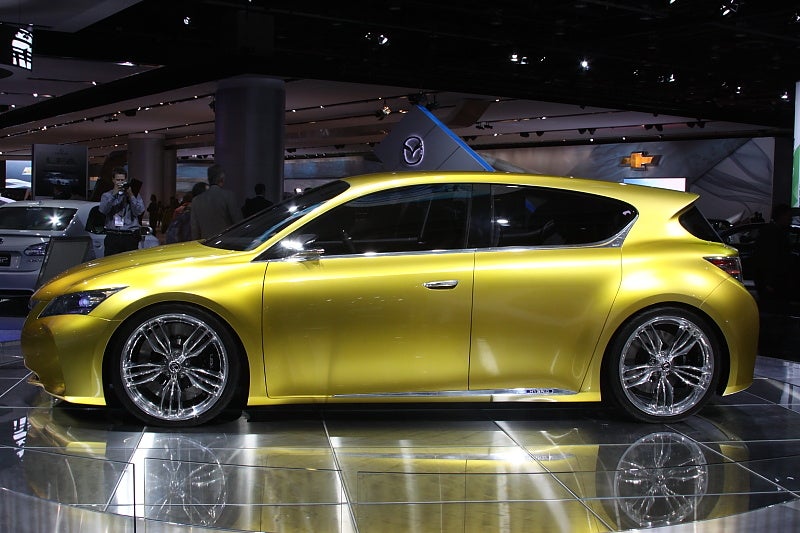 Showing for the first time in North America, Lexus’s experiment in styling for a possible compact luxury hybrid. 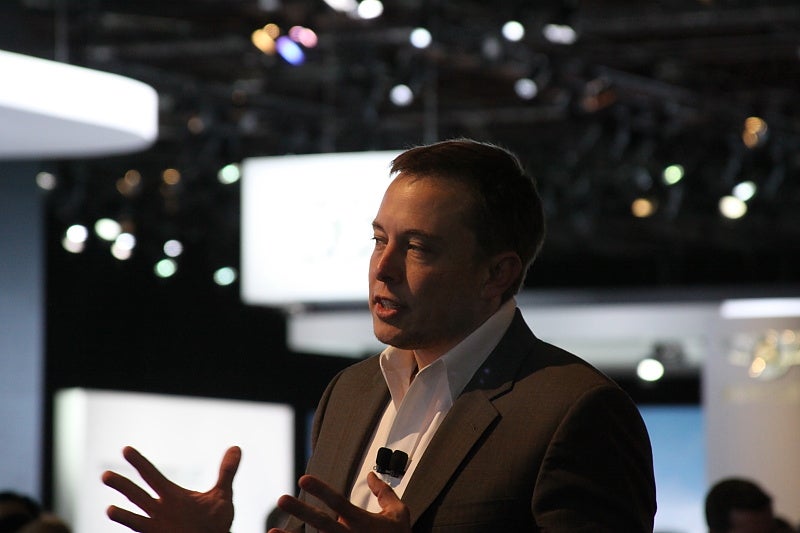 Musk said that Tesla’s sedan, the Model S, won’t go into production for another two to two and a half years, but that this prototype isn’t a pusher—it runs well enough to do “pylon racing,” in Musk’s words. 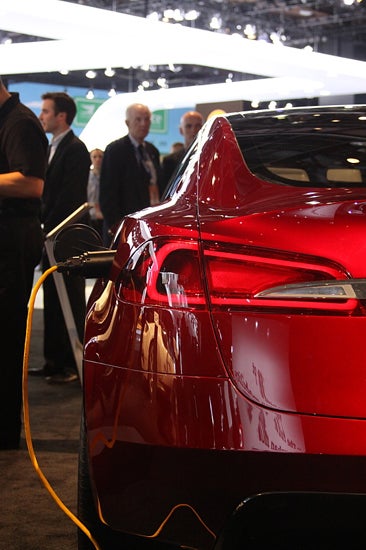 Tesla says that the capacious luxury sedan will seat five adults and two kids, run up to 300 miles on a charge charge, and reach a top speed of 130 mph. 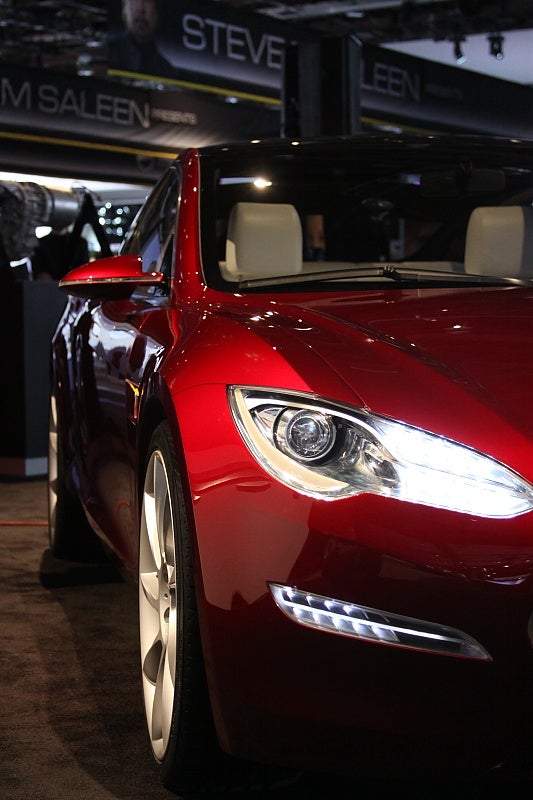 Model S From the Front

The eventual goal is to get this all-electric family car into production on the order of 20,000 cars per year. 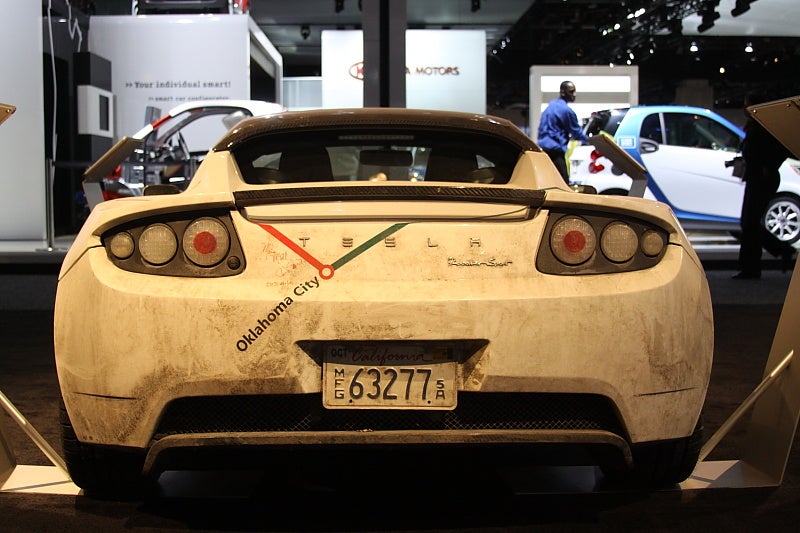 To show that range-anxiety—fear of an electric car running out of juice in the middle of nowhere—is “for the weak,” Tesla employees drove this car (the 750th of the 1000 roadsters the company has built so far) from LA to the auto show in Detroit, recharging along the way.

Inside this box are the 6,381 laptop batteries that power each Tesla Roadster. 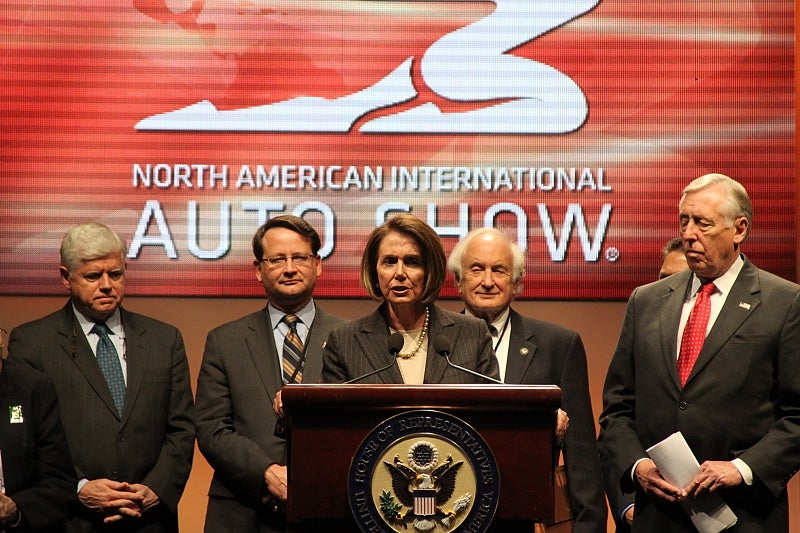 Speaker of the House Nancy Pelosi and a bipartisan group of politicians toured the auto show on Monday; Pelosi gave a brief address at the end of the day. 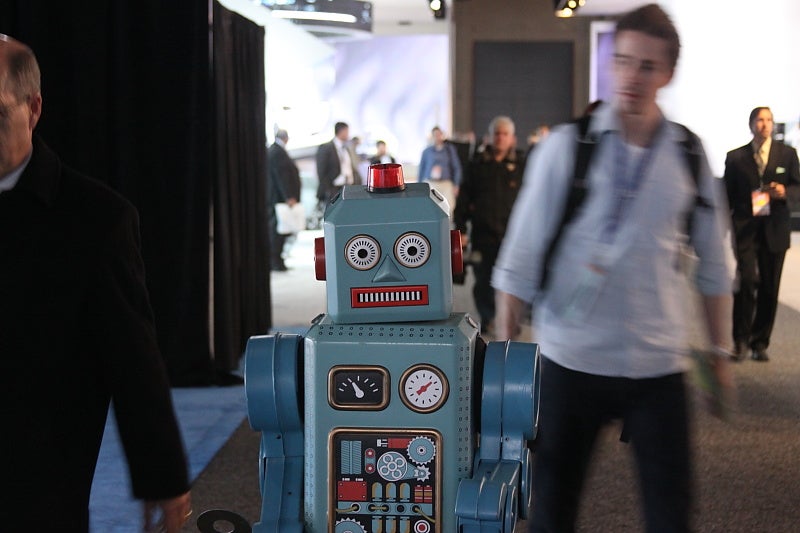 This robot and its female master were confusing the hell out of people left and right on the first day of the auto show. We never learned what was inside that suit, and we prefer to keep it that way—the mystery is sweet. 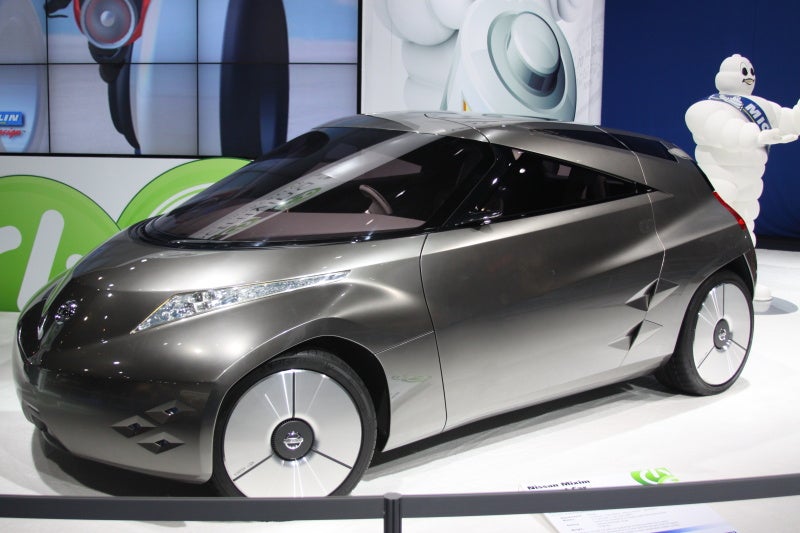 Nissan wasn’t officially in attendance, but in a corner of “Electric Avenue” on the showroom floor you could find a specimen of the Nissan Leaf electric car and this, the Mixim concept, a study for a futuristic youth-mobile with steering and controls based on video-game interfaces. 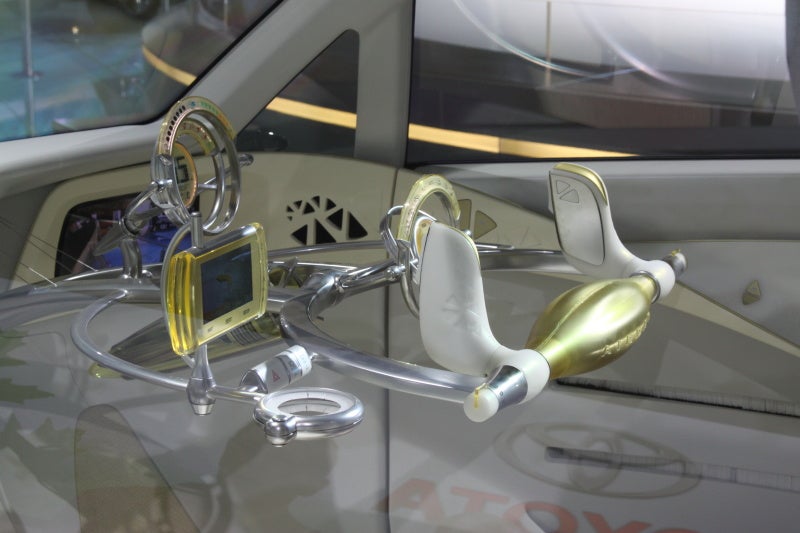 Probably the most unusual concept at the show, the Toyota FT-EVII, which first appeared at last year’s Tokyo auto show, features whacked-out styling and a dentist-of-the-future steering “wheel” that confused us thoroughly. 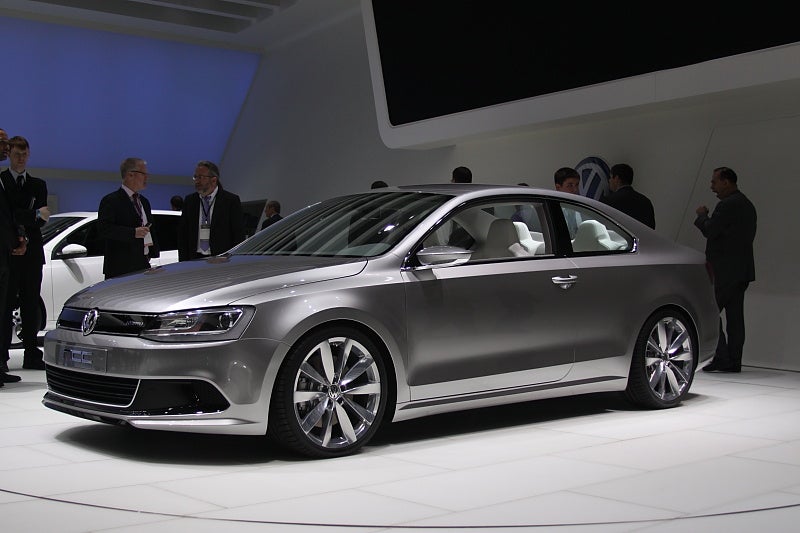