Racing autonomous cars through the desert is one thing. Racing a driver-less car up the steep, winding paths of the... 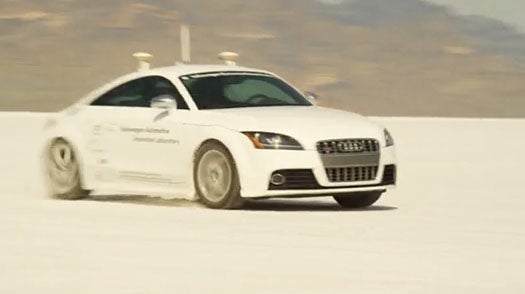 A team of Stanford grad students plan to race their autonomous Audi TTS up Pikes Peak at near race speeds.
SHARE

Racing autonomous cars through the desert is one thing. Racing a driver-less car up the steep, winding paths of the Rocky Mountains at race speeds is quite another, but that’s the goal a team of Stanford graduate students has set for itself, outfitting an Audi TTS named “Shelly” to navigate the Pikes Peak race course wit no one behind the wheel.

Named for French driver Michele Mouton, the first female rally driver to win the Pikes Peak rally in 1985, Shelly’s trunk is loaded with computer gadgetry and a $100,000 GPS system that will help direct the piloting software through the course’s 12.4-mile, 156-turn ascent to more than 14,000 feet above sea level. With the exception of a couple of exterior fixtures on the roof, Shelley looks and acts like a normal Audi TTS, running on gasoline and handling via standard braking and steering systems. But unlike the average roadster, a software package designed by Stanford’s Dynamic Design Lab will execute the actual driving maneuvers, which are designed to closely mimic those of an actual racecar driver.

Other autonomous cars have run the Pikes Peak course before, but those vehicles topped out at around 25 miles per hour; Shelly, whose top speed in the desert is 130 miles per hour, will navigate the course at close to race speeds, a first for a driver-less vehicle.

Funded partially by Volkswagen, Shelley will take her first runs to the peak early next year with a driver at the wheel so the software can monitor human reactions to the course, incorporating them into the software. Shelley’s first autonomous race to the peak should follow shortly thereafter.