In the future, we'll all be able to drive without leaving home. Researchers in Berlin reworked their DARPA-spec autonomous minivan to be controllable by an iPhone app 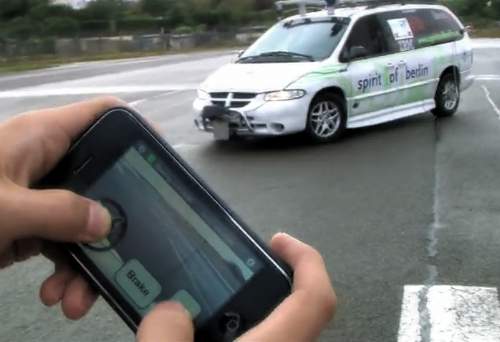 A recent ad for Vodafone featured Formula One champ Lewis Hamilton piloting his F1 steed, as if it were an RC car, using a Bluetooth-enabled smartphone. Many were fooled, some were not, but really it was just a wishful-thinking play by clever ad people.

But one such convergence of smartphones and automobiles apparently is legit. Computer science researchers at Berlin’s Free University worked up this Chrysler minivan that can be controlled remotely by an iPhone app.

The team developed its iDriver app to manage the highly modified “Spirit of Berlin” autonomous vehicle using WiFi and the smartphone’s controls. The unit’s accelerometer controls steering, accomplished at hand by turning the device, while screen buttons control braking and acceleration. The system also sends a live video stream of the road ahead to the iPhone screen.

The van can also drive itself, by way of technologies developed for the 2007 DARPA Urban Grand Challenge autonomous vehicle race (the van was their entry). Packed inside are a stack of IBM Blade servers, video cameras, 3D laser sensors and GPS for positioning, as well as the drive-by-wire system that enables the iDriver app’s functionality. In one experiment, a team member reportedly sat on the roof rack and steered the vehicle from above.