Bugatti reveals a mega-luxury 4-door sedan fit for a robber baron (that tops out at 217 mph). 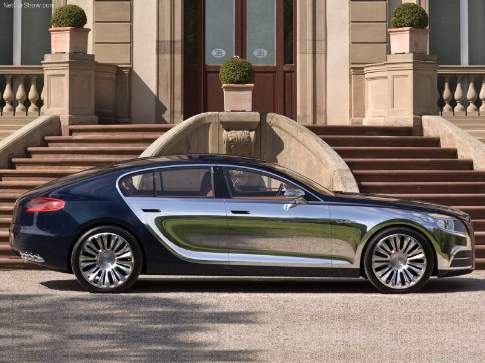 Bugatti released teaser images leading up to the Galibier concept's unveiling, under the working name "Bordeaux," in honor of the Bugatti marque's 100th anniversary. Bugatti
SHARE

Yep, it’s a good time to be one of the haves. Volkswagen-owned Bugatti, maker of the wickedly fast and pricey Veyron, this week unveiled an ultra-luxury sedan for the upmost echelon of car buyers. It’s the Galibier, which takes its name from a pass in the Alps traversed during the Tour de France. But does such a machine still have a place in this age of downscaled expectations and environmental responsibility? Before you answer, that’s an entirely rhetorical question.

The Galibier shares with the Veyron its engine, an exercise in extreme motorworks: an 8.0-liter quad-turbocharged W16 producing 1001 horsepower (in the Veyron). That’s enough to get the two-door Veyron to 253 miles per hour, though reports indicate the Galibier will only top out at a mere 217. Unlike the Veyron, the Galibier’s engine is front-mounted and Bugatti says it can run on ethanol, though how many Iowa cornfields can be dispatched with every quarter-mile run has yet to be determined.

Outside, the Galibier’s two-tone color scheme comprises polished aluminum and a dark blue carbon fiber weave that turns slightly translucent when illuminated. Just the thing for making a first impression whilst pulling into the Kleig-lit driveway of the local viscount’s estate. No word yet on price, but consider a million bucks a probable starting point. 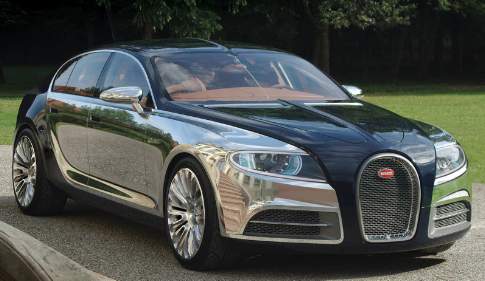 The Bugatti Galibier Concept, The Latest from a Century-Old Luxury Brand

A new, four-door icon of high style? The Bugatti Galibier concept takes its name from an Alpine pass traversed during the Tour de France bicycle race. No word on price yet, but if you have to ask…

Bugatti released teaser images leading up to the Galibier concept’s unveiling, under the working name “Bordeaux,” in honor of the Bugatti marque’s 100th anniversary. 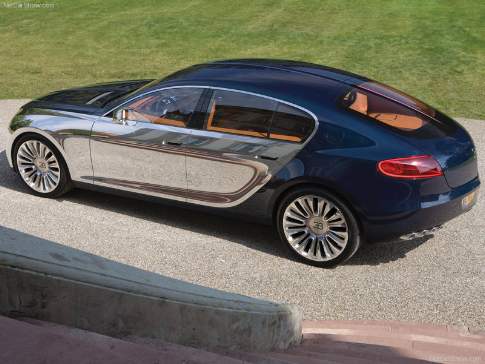 The Bugatti Galibier Concept, Powered by the Veyron’s W16 Engine

The Bugatti Galibier concept gets power from the same 8.0-liter W16, quad-turbocharged engine as the 253 mph Bugatti Veyron, for a Sasquatch-sized carbon footprint. Unlike the Veyron, that insanely powerful guzzle-monster is mounted in the front — not the middle — and can run on ethanol. Don’t expect another record breaker; the Galibier is only reported to hit 217 miles per hour. 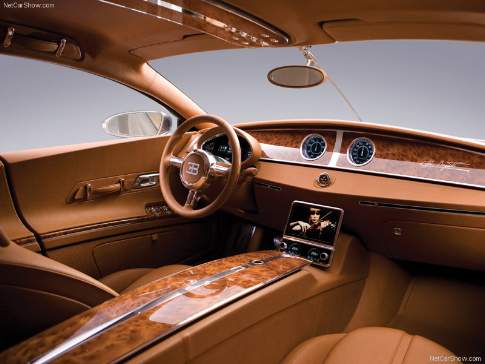 What global economic meltdown? The Bugatti Galibier Concept gets an interior fit for a modern-day Croesus, elegantly appointed with fine wood, supple leather and brushed aluminum. Gauges recalling Bugatti’s early 20th-century luxury heritage mingle with the high-tech glow of an LCD screen. Perfect for catching the latest viola recital during the morning rush.