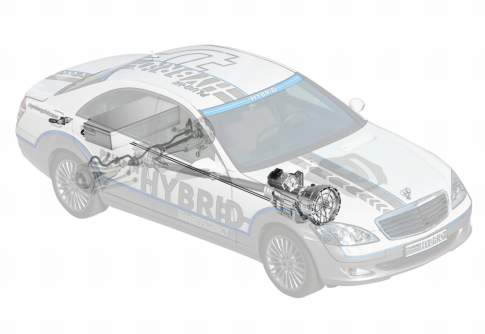 What? Hedge-fund managers, heads of surgery, corporate lawyers and their well-heeled, buttoned-up ilk don’t need plug-in hybrids too? Mercedes-Benz is keeping such an audience in mind for its latest concept car, the Vision S 500 plug-in hybrid. Similar to the S 400 hybrid currently in production, the S 500 can also travel 18.6 miles in electric-only mode and take a battery recharge by way of an electrical outlet. What ever happened to greed is good?

Based on the luxurious S-Class flagship, the Vision S 500 combines a 3.5-liter, direct-injected V6 engine with a 60-hp electric motor and lithium-ion battery pack that can take a plug-in charge. The hybrid module is similar to that in the S 400, though three times as powerful. The battery pack in the S 400 can be housed in the car’s engine compartment, but the higher-performing one in the Vision S 500 takes up room behind the rear seats normally devoted to the trunk. The Vision S 500 also has an additional clutch between the combustion engine and the electric motor, which can decouple the two components during electric-only mode.

Mercedes says the Vision S 500 takes less than 60 minutes to charge in the rapid charge cycle, or four-and-a-half hours on household power. Like other hybrids, the S 500 also gets power from regenerative braking.

All that, the company says adds up to fuel efficiency of a bank-bailout-bonus-guilt-busting 73.5 miles per gallon, and a zero-to-100kmh (62 mph) time of a very spry 5.5 seconds. No word on production yet, but Mercedes will likely share more details at the Frankfurt motor show where the Vision S 500 plug-in hybrid will be unveiled this week.