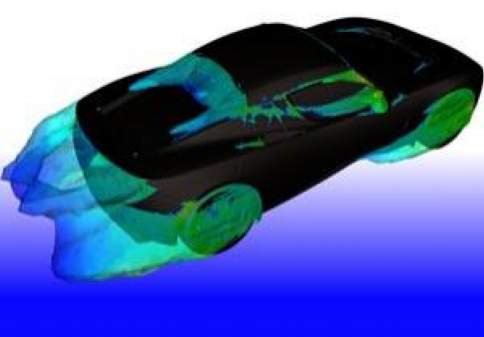 The wind tunnel is an invaluable tool for designing cars that can slice through the air with a minimum of drag. But a team of researchers in the UK are gleaning new aerodynamic insight from a more revealing medium: soap bubbles. Engineers at automotive research consultancy Mira rigged a system of motion-tracking cameras to track the movement of tiny, helium-filled soap bubbles as they swirl around a subject vehicle, capturing its airflow profile in more detail than a wind tunnel ever could.

Helium keeps the 3-millimeter bubbles neutral in the air — neither rising nor falling — so their movement is only attributed to airflow around the vehicle. The infrared cameras, the same kind used in game or movie studios to gather visual data from actors dressed in reflective garb, track the movement of individual bubbles in three dimensions. The bubble-tracking approach captures the speed as well as the direction of air flow, making it more useful than current wind-tunnel techniques.

According to New Scientist, NASA once used the bubble technique to test models of space shuttle. But Mira’s camera system steps up the data outlay by capturing the precise movement of individual bubbles in 3D.

Having a more complex stream of aerodynamics data invariably will open up new possibilities for car designers, who could create more fuel-efficient vehicles with low aerodynamic drag, while becoming less restricted by typical “slippery egg” shapes.