How Chrysler Beat The Camaro To Market 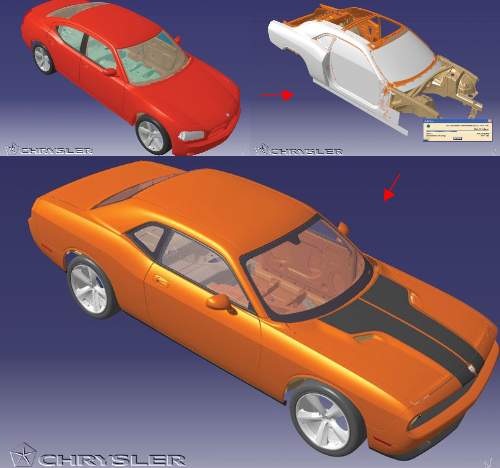 Usually, the drag race comes after the new muscle cars hit the road, not while they’re still on the drawing board. But in a tech presentation in Detroit this week, Chrysler showed off a computer-aided modeling system it developed in-house that it says let the company bring its Challenger from concept to market in just 21 months, quicker than Chevrolet did its similarly muscular Camaro.

The “knowledge-based” engineering (KBE) system compiles all of the company’s engineering knowledge and best-practices information from previous development programs. In this case, Chrysler engineers showed how, starting with a digitized Dodge Charger sedan — the basis for the shorter, two-door Challenger — the software morphed one car into the other. Along the way, the system redesigned every single component part that required a change.

Once the digital model of the Challenger was rendered, engineers ran virtual crash tests (involving about a trillion calculations each). Chrysler says the testing data contributed to the knowledge base, which engineers used to refine the final designs. When the first prototype vehicle was built, from parts tooled directly from computer data, the proto-Challenger met all crash standards. The assembly process was a breeze too, as the system checks the new parts for fit and assembly access, and welding points. Motor Trend reports Chrysler CEO Bob Nardelli says KBE won’t mean more job cuts for engineers, but but will allow it to do more with less as the company becomes part of Italy’s Fiat Group.