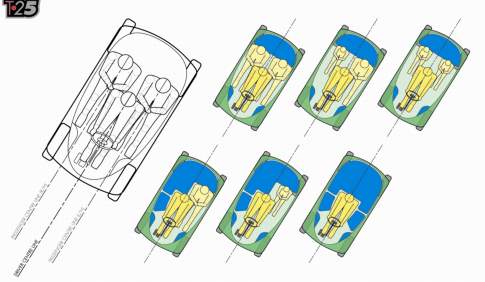 Ex-Formula One race car designer Gordon Murray's tiny T.25 City Car prototype is designed around a central driving position, offering six different interior layouts that can be arranged within 30 seconds. Aside from the driver, either two 6'2" passengers or up to six shopping carts' worth of groceries can be stowed. Gordon Murray Design
SHARE

Auto racing wonks know Gordon Murray as a designer of winning Formula One cars, who also happened to devise one of the fastest sports cars of the past 20 years — the McLaren F1. But as we’ve mentioned, Murray’s been spending most of his time lately on slower pursuits; in particular, a fuel-efficient city car. New details on that car, named T.25, came to light today, as Gordon Murray Design revealed a striking new seating layout. Granted, it’s not the sexiest of car-tech news you’ll get today, but it does prove that, given a problem to solve, good designers can always manage outside-the-pod thinking.

The T.25 City Car’s interior arrangement stems from a central driving position; the driver takes up most of the tiny car’s forward interior space. But for passengers and cargo, Murray came up with a system by which each one of six seating and stowage layouts can be adapted within 30 seconds, accommodating either two 6’2″ adults or 26.5 cubic feet of cargo. The latter arrangement, the company says, is enough to pack in six shopping carts’ worth of stuff.

Murray calls the central driving position, officially, ‘iCentre®’, a concept he put forth during his Mechanical Engineering studies at Durban Institute of Technology in South Africa in the mid-1960s. His first (and only) production car with the three-seat configuration was the McLaren F1 from the late 1990s, which hit 240 mph and cost upward of $2 million.

Murray says the T.25’s seating and cargo system will give it an advantage over its rival Smart Fortwo, a two-seater with 7.8 cubic feet of luggage capacity. The T.25 will also have a push-button transmission instead of a gear lever, with the options of fully automatic or manual.

And the T.25 isn’t only small, but Murray, who’s also working on a successor to the F1 supercar, says it’ll take less space to build than a typical car. His iStream® Manufacturing process, he says, will reduce the area and investment of a typical car factory by 80%.

Now all he needs is someone to build it. Any takers?