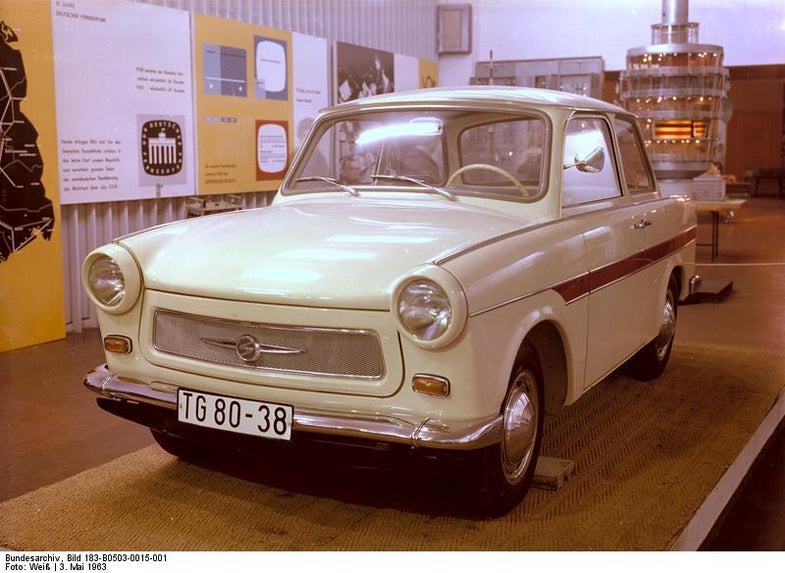 In what could very well become the auto industry’s greatest comeback story, a trio of German companies is hoping to introduce a revamped version of the pride of DDR auto engineering: the Soviet-era Trabant.

According to the prototype the three companies plan to unveil at this year’s Frankfurt Motor Show, the Trabant nT (as in Neu Trabant!) will be powered by an all-electric drive train, sport solar panels on the roof for juicing the AC and have a range of up to 150 miles.

Better known as a “Trabi,” the car gained notoriety during the Cold War era as the slow (top speed: 75 MPH), smoke-puffing, gas-guzzling symbol of Communist utilitarianism. Over 3 million Trabis were made over 30 years, until production stopped in 1991, right along with the fall of the Soviet Union.

The companies behind the idea—German auto parts maker IndiKar, engineering group IAV, and toy (yes, toy) car producer Herpa—plan to unveil the prototype of the New Trabant at Frankfurt, which opens September 17. There, they’ll be on the lookout for investors willing to fund the venture and help bring the cars to market by 2012.

Commercial availability is definitely looking likely given the Trabis’ cult-like following and Germany’s love of anything DDR kitsch (see: Ostalgie, or nostalgia for the East, and Ampelman East Berlin’s infamous crosswalk man). In fact, Herpa first got the idea for the new-and-improved Trabis when its mini toy versions of the original car proved a wild success, with sales numbering in the hundreds of thousands. From there, the company went on to propose a revamped Trabi at the 2007 Frankfurt Motor Show, where a quick poll of the Germans and other Eastern Blog fetishists present demonstrated that yes, there was appeal.

If these puppies do hit the market, let’s hope they’re easier to secure than their Soviet era counterparts, which at times came with a 15-year waitlist.

[Via Physorg.com and TheAge.com]